Harmony Raines, Paranormal Romance, Return To Bear Bluff #1, Shifter Romance, The Bear Is Back In Town 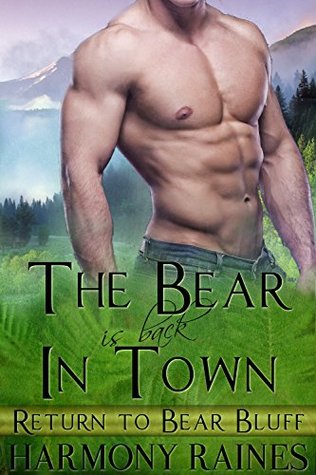 Dylan is returning to Bear Bluff after being away from home for a decade.  His grandfather still lives in their old cabin, but he’s getting up in years and can no longer make the trip to the city to visit with Dylan easily, so this time Dylan is coming home.  He’s a changed, successful man who is far different from the young man who left under a cloud.  Only he and one other person know the facts behind his leaving, and Dylan intends for it to stay that way.  What he hadn’t expected was to find his mate broken down on the side of the road on the way home.  He wasn’t certain if the fates were working for or against him, but he couldn’t turn his back on the one person meant for him.

Stephanie has also been away from home for awhile.  After her father’s death and her brother’s actions she returned to help her mother tend to their farm.  If Steph has her way soon the property will become a successful Bed & Breakfast giving her mother a decent living while retaining her home.  Trouble is the farm is in bad shape and she cannot really afford to hire help so she’s learning as she goes.  Too bad her ancient truck decided to simply shut down far from home.  Oh, she could shift and make it home but then she’d have to leave the lumber here… and she needed that for repairs at home.  Just as she was certain she’d have to take the risk she heard a motorcycle coming down the road.  Little did she know that soon she’d be face to face with her mate and life was going to get interesting.

The Bear Is Back In Town starts off the new series Return To Bear Bluff with a fun, sexy and interesting story.  Dylan and Steph, while facing a few complications, actually make the flow into mates very smoothly.  Neither fought it… well, much on Steph’s part.  And while the getting the mate on the same page is entertaining, sometimes it’s simply fun to watch two people accept their fate and move forward with life.  Dylan is holding a few things back from Steph.  And while they were important things, the way they were revealed made sense and fit this couple perfectly.

No high drama, but a simply, touching and sexy love match between two Shifters who definitely needed each other.  I enjoyed this one very much and have downloaded the next story in this series.  If you love Shifter Romance then I believe you’d like The Bear Is Back In Town.