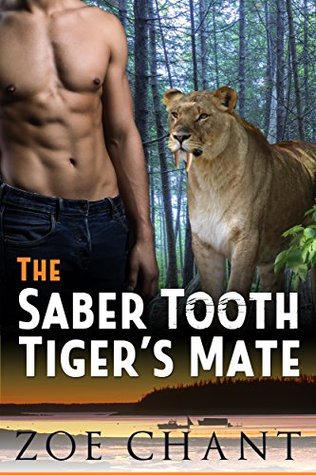 Curvy graphic designer Gwen Brooks is shocked when her boyfriend breaks up with her out of the blue. Sure, he’d never set her heart on fire, but she knows that sort of fairy-tale romance doesn’t happen in real life. Gwen takes herself and her heartbreak to the sleepy Maine coastal town of Catseye Cove, to help fix up an old family home. But when she meets Jace, the sexy carpenter who’s restoring the house, she realizes that some fairy-tales just might be true after all.

Saber tooth tiger shifter Jace Wyatt has spent his entire life in hiding, along with his clan. If anyone tracks them down to Catseye Cove, an ancient shifter blood feud could get them all killed. So Jace works as a carpenter and tries not to dream of anything more. But the moment he sees Gwen, Jace knows that she’s his mate. But can he trust he with the secret he’s built his entire life around?

When old enemies resurface, Gwen and Jace have no choice but to confront their pasts– and their desires. Will they survive the clash of the clans? Can they reconcile their differences and make a home for each other in the only place that matters… their hearts?

Shifters are sensuous creatures and show their love to their mates physically – so this sexy tale is intended for the 18+ reader.

Read on for my thoughts on The Saber Tooth Tiger’s Mate.

The ability of authors to take words and create an entire world astounds me.  When one author can take those words in a given genre and create several types of worlds, each unique and enticing is a simple gift.  One that I intend to open as often as possible.

In Zoe Chant’s The Saber Tooth Tiger’s Mate we have such a world.  Jace and his immediate family are Shifters – an extinct animal that no one would ever expect to run into in the surrounding forests – they are Saber Tooth Tiger Shifters, and their’s is a dying clan.  Blood feuds have existed forever and the feud between these particular families has almost wiped out the Saber Tooth Shifters from the face of the earth.  The Cougar clans have done everything in their power to eradicate the Saber Tooth Tigers, and as far as Jace knows, his family is the last surviving clan of Saber Tooth Tigers anywhere.  They’ve settled in the quiet, little area known as Catseye Cove and while his family still lives on a small island, Jace has made his home on the mainland.  He’s a carpenter by trade and a damned good one too.  Quiet, he keeps to himself for the most part – waiting, for what he doesn’t know but some instinct is saying soon, just wait a bit longer.

Gwen is leaving Boston and an abusive, whiny, childish scumbag of an ex that she wasted five years on.  Her family has come into an inheritance, one badly in need of repair home in the small community of Catseye Cove.  She is going to be house-sitting and getting the house ready for the tourist season – surely someone would love to stay here in this quiet beauty.  Gwen isn’t looking for anything more than peace and quiet, hard work – and the determination to reboot her life now that she’s cut the maniac loose.  She never, ever expected to find the man who would change her life forever, or the one who would love her so completely.

There she is, finally she’s here –  that’s all Jace could think of as he took in the sight of this beauty standing in front of him.  His mate.  But… she was human, and in trouble it seems.  Can he really believe that she’ll protect his world, his family’s secrets?  He doesn’t know yet, but he’s not letting Gwen out of his sight now that he’s found her.

The Saber Tooth Tiger’s Mate is softer, has a more laid back feel to it than many Shifter Romance stories.  Yes, there is a very real and very present danger to Gwen and Jace – madmen always bring destruction.  And the action is gripping and intense as Gwen and Jace fight not only for their own lives but the survival of Jace’s clan.  There is also an unfolding love, one that is strong and worthy of the fight to survive one man’s madness for the gift of that life spent with the perfect for you mate.

I completely enjoyed The Saber Tooth Tiger’s Mate and would not hesitate to recommend it to any lover of Shifter Romance.  While this story is a standalone, I can see possibilities within the storyline for future visits to Catseye Cove.  Jace has a brother and a sister plus his partner/friend.  Gwen has a very special best friend – plus there is an outside force as well.  Yes, I can see where there are possibilities that I sincerely hope will be fulfilled one day.