Shifters of The Glen #2, Skye Jones, Wolf In The Woods 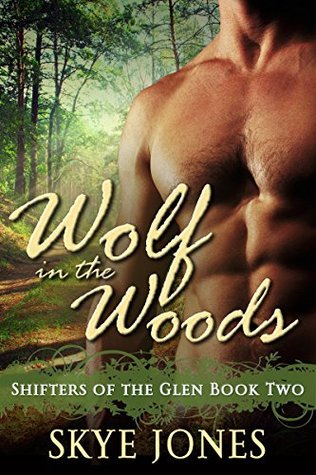 A camping trip in the Scottish wilderness is exactly what Izzy needs to nurse her bruised heart. But danger lurks in the isolated woods where she pitches her tent.

Wolf shifter, Louis, catches Izzy’s scent and is immediately drawn to her. He isn’t supposed to want the curvy human female as he is the pack enforcer, not an alpha, but he can’t resist her. He defies pack orders to keep watch over her.

When Izzy is brutally attacked, Louis is there to help. He takes her back to his pack and the two of them unleash an intense attraction they find hard to deny. But forces are ranged against them, and they must overcome many obstacles before they can be together.

Read on for my thoughts on Wolf In The Woods.

Louis scented her in the woods.  How was this possible?  Another empathine?  The pack and Drew had been fortunate to find Brooke, an empathine – but another was a miracle.  He should by rights go and inform the Alpha, for by pack rule and law the empathine belonged to the Alpha or his son – but he could not.  She belonged to him, a mere enforcer – but he would fight to have her at his side as his mate, if she would have him.  But first, he had to engage the young woman and get her to care for him.  She was in trouble, and he would kill anyone who harmed her.

Izzy made this camping trip only because it was planned, and she’d not look lost and dejected in front of the friends of her former friend with benefits.  But she did not want to be here, and spent a lot of time away from camp thinking, brooding and putting in time until they could leave.  She wasn’t really frightened by the man who appeared suddenly in the woods, but she wasn’t stupid either, and quickly made her way away from him.  She also wasn’t afraid when a majestic wolf appeared later with the same intense green eyes.  When Gregg, one of the campers in her group,  threw a rock at the wolf, injuring it she protested and tried to go after the wolf – but this jerk had other ideas.  As Gregg attacked her and tied her up, he was very descriptive of what he intended to do to her – before he killed her.  The stranger from the woods appeared again and rescued her from a madman.  But they both were badly injured and Louis did the only thing he could, he took her back to his pack.

Wolf In The Woods is an intense and sexy story of two people who were destined for each other – against the laws and rules of Louis’ pack.  Difficult choices have to be made – and hearts will be broken as this couple comes to terms with their new reality.  I enjoyed this second story in the Shifters Of The Glen series differently than the first, perhaps because it’s a far more emotionally gripping story.  It pulls at you differently than usual.  Izzy has to make a choice and when she does the consequences for them both are heart wrenching.  But love can overcome anything if given a chance.