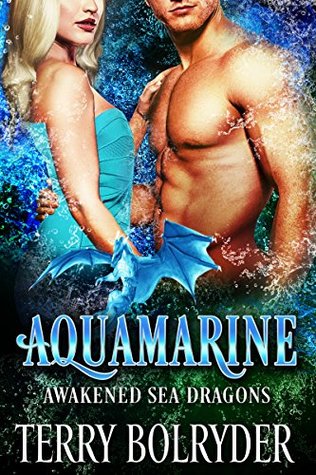 Marina, the last unmated sea dragon, is about to make the toughest decision of her entire life. The Mercury dragon, hated prisoner of the earth dragons and the only person willing to help her when she needed it most, has been captured. Taken away by compatriots he never knew existed, possibly to face execution. Her only choice? A one way trip to the distant planet of Drakkaris, to risk everything in the hopes of saving the one person everyone else says is irredeemable. But deep in her heart, she knows there’s hope. If only she’s not too late…

Mercury knew his past would catch up to him. He just didn’t expect alien dragons from another planet to be the ones to take him away, ready to serve him his just desserts. But everything is turned on its head when Marina, the only ray of light in the darkness that is his existence, mysteriously shows up at the last second, offering herself in exchange for his life. But Mercury can’t to let the only person that matters to him now give herself up. So he joins a proposed challenge, where six sexy dragons will be competing for the chance at being Marina’s mate.

Mercury may claim that he’s only competing to offer Marina protection, but even he can’t deny the sizzling chemistry that quickly boils over between them. For the first time in his life, Mercury is wanting more, and regretting the person he has become. But it may be too late, because Mercury is about to find out that the past always catches up, sometimes with lethal consequences.

Ever since a devious, trouble making dragon first showed up I’ve been wanting to see this dragon turn away from what he is and become what he should have been all along.  I wasn’t certain if Ms. Bolryder was going to give Mercury the chance to redeem himself eventually… and I’m very glad that she made the decision to explain how Mercury came to be the dragon who caused such trouble and destruction.  There usually is a reason why, and I began to have hope for Mercury once Marina entered his cell the first time.

I have to be frank and say that the alien romance has never captured my attention.  Yet with this romance, these dragons are so familiar to me in their honor and in some cases, dishonor, that the dragons of Drakkaris fit quite well into the established world I was comfortable with already.

I enjoyed Aquamarine very much, in some ways I think it was the best of this particular Awakened Sea Dragons series.  Mercury is conflicted, and changing – and he isn’t always happy about it, but he feels it nonetheless.  Marina has done everything she can to save the dragon she believes is her mate – now it’s up to him to do some saving of himself for her.  Fast paced, sexy in all the right places with danger, intrigue and redemption.  All combine into an exciting, enjoyable story that I’d happily recommend to any Paranormal Romance or Shifter Romance reader.

I can’t wait to get started on the next adventure with some pretty amazing sets of dragons in the Dragon Guard of Drakkaris.