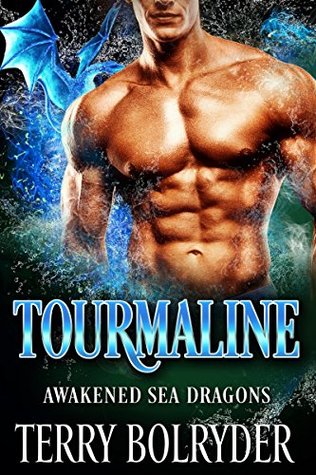 Kai, formerly a powerful storm dragon, can’t seem to stop causing chaos wherever he goes, despite being collared in human form. Now he’s been ejected from the company of other dragons and sent out to an island to take a vacation and not come back without a mate. Something that isn’t easy to do, given that his awareness of social norms is so low that even his extravagant sexiness can’t overcome it. Until he sees his mate, the embodiment of Venus, a goddess so sexy he can’t believe she is his. Finally, Kai is willing to make an effort in this world, if it means he can win this exquisite creature.

Renee is used to being overlooked, so she doesn’t mind going with her pretty friend on a free vacation after a breakup, even if she knows all the guys will ignore her as if she isn’t there. Until the hottest man on the beach suddenly takes an interest in her. Too much interest. Kai is too tall, too blunt, and too aggressive to be her type, but somehow despite his awkwardness and his obsession with water, she can’t resist the innocent kindness and strength of spirit she sees inside. Not to mention his hulking muscles and storm-blue eyes.

But as Renee is opening herself to realize she deserves more than she ever hoped for, and Kai realizes life on land is great when he can spend it in sizzling moments with his mate, dark forces are circling. And if the Tourmaline dragon isn’t careful, he’s going to lose more than a chance at mating. Maybe even his life.

Kai has been the grumpiest of the recently awakened sea dragon siblings, definitely the most vocal about his restraints and the most annoying prankster imaginable… considering the personalities of the other dragons at the mansion.  But eventually enough is enough, and Kai has been sent on a vacation to find his mate… and with don’t come back until you do ringing in his ears he heads for Hawaii and his destiny.  Soon one grumbly sea dragon will meet his match in a human woman who has believed the untruths told to her for a lifetime, and desperately needs the love of one particular sea dragon, even if she’s unaware of it just yet.

I actually adored Kai.  Sure, he’s gruff but he is also totally honest, always.  If he doesn’t mean it he doesn’t say it which often times gets him in trouble.  He is adrift on the land, doesn’t understand humans at all and clearly has no idea how to tone down his abruptness in order to win the woman of his dreams to him.  Renee might be his mate, but until she knows that, until she believes that she is as beautiful and desirable to him as he claims… then Kai is going to be fighting a battle to get one tiny human to hand over her heart.  She already has his but she doesn’t know it.

From the beginning I loathed Liz.  No friend treats a true friend as she treats Renee… but then, she was no friend as she later proved.  I loved seeing Marina’s struggle to get Mercury to talk to her, and the possibilities that are opened up there for the future.  No one messes with Marina’s brother and seeing her bond with Renee was truly enjoyable.  Gotta love girl power.

While Tourmaline was an enjoyable, steamy, extremely satisfying Shifter Romance, it also opened up questions that I now will be watching for the answers to.  To say that I’m anxious to see where we go next is an understatement.  And now I’m off to go pick up Aquamarine to find out what happens next.  I’d definitely recommend this story, this series and the connecting series to any Paranormal Romance or Shifter Romance reader.  Hot, steamy, sexy times, interesting secondary characters, always danger and twists in the plot that we rarely see coming.  Yeah, my kind of Shifter Romance series.