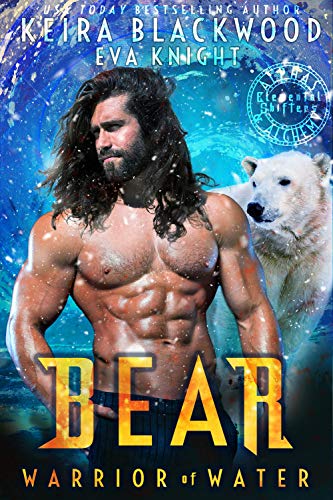 ‘Bear Warrior of Water‘ is the fourth title in the ‘Alphas & Alchemy: Elemental Shifters’ series and this one kept me glued to the Kindle from the first page to the last… and then wishing for just a bit more.

Indra is the Warrior of Sky, a position she never, ever wanted but there really isn’t any choice when the dragon god picks you.  She’ll carry out her orders but sometimes she does that in her own unique way since she often disagrees with those orders… but we’ll keep her secret for as long as possible, at least.  Right now she and other Thunderbirds have to remove humans from the island and they will meet resistance in the form of Hale, Warrior of Water.

Hale has no problem with the washed ashore humans, his position or duty is to protect the shifters among them.  Right now he’s faced with a challenge from the hovering Thunderbirds who are determined to remove the humans from the island in any way possible… and he’s not about to allow that to happen.  A compromise is reached and it’s then that Hale and Indra come to realize that there is more going on between them than just following orders.  Now they have to figure out how to deal with their attraction to each other, which is scorching — and how to keep those who found their way to the island as a safe haven protected from her dragon god’s wrath.

I adored both Hale and Indra for different reasons, yet those same reasons are why they fit so well together even if on the surface they seem to be at opposing sides of this dilemma.  This series has grown, bringing even more interesting people, shifters, magic to the island that wasn’t supposed to be discovered.  I believe that this series should be read in order for you will meet or learn of others that have had their tales told.  Do you have to?  No, of course not, but it makes more reading sense if you can, in my opinion.  I had a blast with ‘Bear Warrior of Water‘ and I believe you’ll have that same reaction – so, go ahead, pick it up, or get started on this series right now.  You won’t regret that decision.