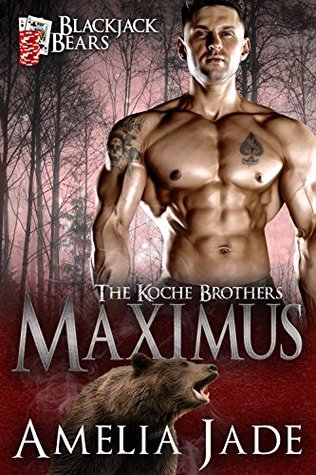 Haley Salvannah’s day started off normal, though it didn’t last. Things go completely awry when a stunningly handsome man sits down and hijacks her live TV show. The only thing more shocking than his appearance is the message he has to give. Enthralled by his passion and soulful brown eyes, she lets him speak live to her audience. What follows is the wildest adventure of her life, complete with terrifying encounters, life-threatening situations, laughter, and most importantly, a love she never knew could burn so bright.

For bear shifter Maximus Koche, eldest of five brothers, his journey is almost at an end. But in his single-mindedness to get a message out about the threat his species faces, he has inadvertently dragged the gorgeous and completely unprepared TV host into the middle of his dangerous world. Now he has to juggle defeating the Institute, killing its leader, and protecting his newfound mate. It’s a tall order, but if anyone is up to it, it’s the leader of the Blackjack Bears.

Life as a fugitive isn’t what Haley expected, but it’s given her Maximus, for which she is more grateful every day. With the Institute still hanging over his family like a guillotine though, she knows she’ll never have him completely to herself until it’s over. With his ruthless persistence and her forward thinking, they can’t be beat. But the Institute doesn’t play fair, and they’ll stop at nothing to eliminate her, him, and the entire Koche clan. It’ll take the trust that only mates have to break their enemy. But can Maximus open himself up before it’s too late?

Blackjack Bear: Maximus brings us to the ending of the Koche Brothers series – and what a satisfying finale it is.  While we’ve gotten glimpses of Maximus throughout the series we never really got to know the man firsthand.  That he’s been imprisoned, tortured and used as bait – that we know.  His drive to take down the Institute for good is not surprising considering how they’ve ruined so much for him, his family and shifters in general.  The means to begin that process is epic.  It begins with a television talk show hostess, a connection felt and an outrageous plan.  And it ends with a new life for him, his mate, his brothers and their mates – and so many others.

The Maximus we meet here is not really the man I was expecting.  Strong, powerful, gruff even – those things I expected.  I didn’t expect his sense of humor, his bantering, teasing with Haley.  I expected a damaged shifter, and I got a determined man ready to face this enemies and to end this all in order to live his life free once again.

Since this is the last of the Koche brothers stories, I feel you should experience this one firsthand.  It’s an engaging, gripping, funny and sexy tale that is sure to satisfy any follower of these series completely.  I’ll miss these rambunctious men and their amazing mates – but who knows, we may meet up again one day.

One final thought.  What an ingenious way to end this story and move on to what comes next.  I’m certainly looking forward to what comes next, in fact, I’ve already downloaded Wing Her Over which is the griffin shifter, Andrew’s story… and hopefully the start of something amazing.

I would highly recommend this story, this series and the entire set of connecting series to any Paranormal Romance or Shifter Romance reader.  These adventures are amazing, touching, mysterious, dangerous and just solid stories that any reader would enjoy.