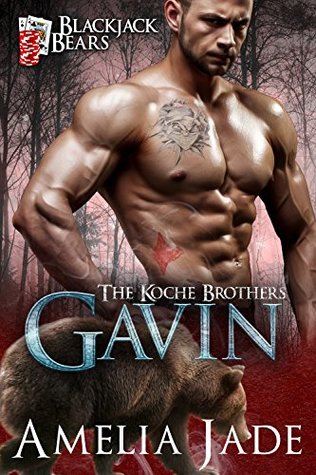 That’s all Gavin Koche has known. He’s been the equalizing force between the two sides of his brothers. Wild and unpredictable when needed. Calm and stoic when called upon. He’s been whatever they’ve needed. But what about what he needs? Well, that would be the short, curvy, copper-haired beauty that he’s just gone and fallen head over heels for. Unfortunately, her introduction to him and his world came at a rather inopportune moment…

Lena Piter preferred to stay behind a desk. She was at home there, with her computer, keyboard, and mouse. Technology was her friend. Heading out into the wild was not her idea of fun. For instance, there weren’t people trying to kill her at home! Despite a dramatic rescue by the mysterious and reclusive Gavin, her stay has gone from sleeping in a cabin to passing out on the forest floor, with nothing but the handsome, ripped, and warm shifter curled up behind her.

Although she desperately wants to return to safety, the shifters—and Gavin—need her help. Lena doesn’t want to let him down, so she volunteers to go along with him on a dangerous mission where her skills will come in handy. She knows that Gavin will protect her. Gavin knows he loves her, but an inadvertent mistake on her part may have deprived him of the chance to say so. He just doesn’t know it yet. Will Lena be able to correct her error in time, or has she just killed Gavin and all his brothers?

Blackjack Bears: Gavin is one of those stories that will grab your attention, and perhaps your heart as well, right from the beginning.  Gavin is the middle brother, he’s always been the peacekeeper between his older and his younger brothers.  The one to step in and stop them, and to take the brunt of their displeasure when he does that.  It’s rare that his brothers see past the shield he’s holding over his emotions.  He’s the quiet one, the one who wants peace above all else… as far as his brothers are concerned.  It will take a pretty amazing woman with her own self-worth issues to finally allow them all to see what an amazing man Gavin truly is.

Lena’s skills are not on the front lines of war, but in the subtle knowledge she can gain through her computer abilities… and maybe a bit of hacking when warranted.  She’s worked with a shadowy group that wants to end the Institute’s plans, but always in the background unseen.  Now she’s been asked to travel to the woods and bring her unique skills to those that need her the most.  The last thing she expected to find were the Koche brothers in all their battling glory – or the one man who could calm them… and stir her up.

I was caught up in Blackjack Bear Gavin with very little effort.  I’ve followed these connecting series from the start and they only continue to fuel my need for more of their stories.  Gavin and Lena work so well together.  They each have varying self-worth issues that the other seems to be able to help resolve.  Now they simply have to survive the Institute’s men and get on with living.  We’ll meet up with some known villains, a few new faces to add to our loathe list, an epic battle as well as the sexy moments as Gavin and Lena discover what they are to each other – mates.

If you love shifters, drama that builds over several stories and continues even better, some sexy moments with a very hot shifter – then this story and these series should be on your reading radar.  I’d recommend them for any Shifter Romance or Paranormal Romance reader who enjoys a solid story with fast paced action and interesting secondary characters.