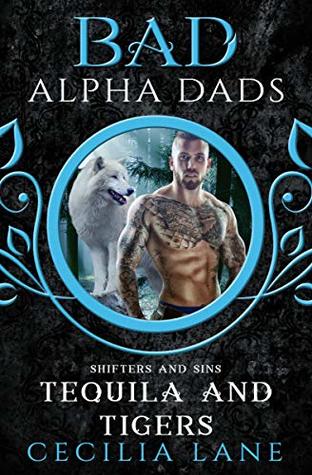 TEQUILA AND TIGERS is the second story in Cecilia Lane’s Shifters and Sins in the BAD Alpha Dads line.  Most of what you’d need to know about this title before picking it up you’d find in the Cover Description.  What that doesn’t tell you is how emotionally engaged you’re going to be in Wyatt, Allana, and even Atticus’ lives.

There is an evil piece of crap involved, namely Alanna’s father.  A father who framed his daughter’s young mate for murder and tried to have him executed since he had other more profitable plans for his daughter than mating with an insignificant wolf.  Wyatt left Redwater that night, it was his only option to keep Alanna safe, at least in his mind it was.  It was also his biggest mistake, for Alanna carried his child and left alone she was disowned and kicked out of her father’s tiger streak.  No great loss really, but she learned early on just how vindictive and evil her father truly was.  She and her son survived through the kindness of the townsfolk who were not part of her father’s streak.  She survived, right up until the night of the ousting of a nasty MC gang that had taken over the town.  The man she loves, her mate was alive – somehow – she saw his wolf, tasted his scent and knew that she’d been lied to for years by her father.  Now to find him, explain to her pre-teen son that the father he thought was dead… wasn’t.  And to get some answers.

The action is intense and fast-paced, the sizzle between Wyatt and Alanna is off the charts, the adolescent angst of Atticus was perfectly played and we see true evil get karma right where it hurts most.  TEQUILA AND TIGERS will capture your imagination and keep you flipping pages.  Next up is one bear who believes there is no one for him — he’s wrong, but that’s another story.