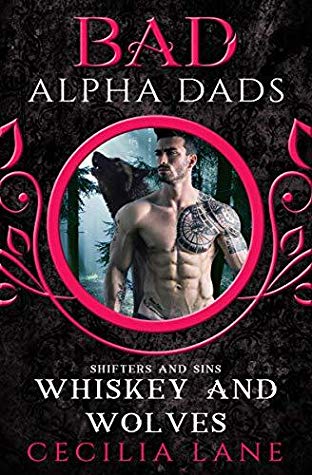 A single wolf shifter. A surprise baby. Enemies who want to make his little girl an orphan, and his old lady a widow.

Five minutes ago it was just Jensen, a cheap drink, and the start of a brawl with members of a rival motorcycle gang intent on murdering him. He’s happy to let them try—until a former one night stand, Noelle, walks into the bar and pins him with a look of death, revealing they have a daughter.

A little girl with eyes like his, peering at him from behind her mother’s legs.

Five minutes ago he was a single wolf shifter. Now he has to sober up, alpha up, and protect the woman and child who are now a weapon his enemies can use to run him out of town.

Her child’s father is back, an alpha wolf shifter with a bad boy edge. All she needs is for him to teach their daughter how to control her shifter nature. He’s nothing Noelle should want in a man—but everything she craves.

Only she didn’t know throwing down the gauntlet in a local bar would mean becoming the targets of the local motorcycle gang. Didn’t know their sizzling chemistry would morph into something deeper, something worth fighting for.

Jensen’s dog days are over. If he can’t shield his mate and daughter from the heat, they’ll all burn.

WHISKEY AND WOLVES begin the Shifters and Sins series by Cecilia Lane.  One broken pack, one Alpha’s descent into madness was Jensen’s final straw.  He walked out and away while a few others followed along with him.  That old pack was dangerous, vicious, full of the madness that only broken pack bonds can create.  He had no desire to be an Alpha to those men who left with him, all he wanted was away from the madness.  He was no leader.  Jensen didn’t know where he was headed but it wasn’t where he ended up.

A one night stand after a brutal breakup resulted in a changed life for Noelle.  Now she’s a single mom to a wolf shifter daughter who is becoming uncontrollable during her shifts.  Noelle needs help and went looking for it in the wrong place – and found the man she never thought to see again.  Jensen.

Noelle takes no crap from anyone, especially her daughter’s father who she hasn’t seen since their one night together.  He doesn’t get to tell her what to do now.  Except she’s opened a door to more trouble than she can even imagine, and the only hope for her safety and their daughter is to let Jensen in – at least for now.

WHISKEY AND WOLVES is packed full of danger, sizzling steamy moments, accepting the past and moving on, finding your mate and your daughter on the worst day of your recent life, and becoming so much more than could have been imagined.  I loved this story, the characters are intense and believable (for the genre).  As a human, Noelle has no idea of what a mate truly is, but she’s about to find out.  Jensen is holding onto the past when he needs a fresh start for his family.  He has a choice to make – and it needs to be the right one for him and those he loves.  Looking for a fast-paced Shifter Romance?  Then you’ve found a really good one in this story.