The Commander and The Dragon by Sloane Meyers 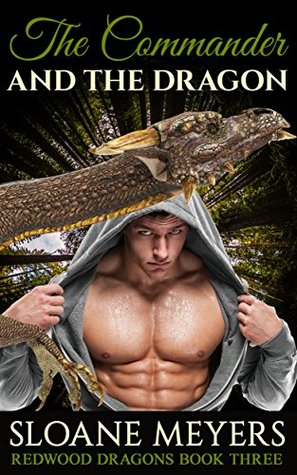 MacKenzie ‘Mac’ Somers is used to being judged based on outward appearances. She has gained renown as the youngest wizard to ever serve as Commander-in-Chief of the Falcon Cross army, but there are always those who think her youth—or her love of all things pink and sparkly—mean she can’t be taken seriously. And her new co-commander, dragon shifter Zeke Pars, judges her from day one. Mac is determined to show him that she can handle an army just fine by herself, and she’s also determined to ignore the butterflies that fill her stomach every time she sees Zeke’s handsome face. But as the enemy’s forces grow, and dark magic fills the air, Mac wonders if the doubters are right. Is she in over her head after all? She needs Zeke’s military expertise more than ever, but does accepting his help make her weak? And can she manage to be in the same room with him every day without completely losing her heart to his smoldering good looks?

Dragon shifter Zeke Pars is used to feeling out of place, but his latest mission has taken things to a whole new level. He’s arrived in the wizarding town of Falcon Cross with several of his dragon shifter clan mates, and they’ve sworn to protect their wizard allies from the growing threat of war by a mysterious, evil enemy. Zeke is an expert in military strategies, and he’s prepared to whip the wizard army into shape. He soon finds, though, that wizard customs and traditions often clash with his ideas of good battle planning. Not only that, but he can’t take seriously Mac, the commander in Falcon Cross. Not when she giggles and wears sparkles and pink to official functions. Zeke hates that he’s forced to work with her, but he has no choice. To his surprise, it doesn’t take long for him to see that there’s a tough, intelligent woman behind Mac’s sparkly exterior. Not only that, but he can’t ignore her beauty, or the way his heart beats faster every time she’s around. With war on the horizon, though, he doesn’t have time for romance…or does he?

Of the dragons heading to Falcon Cross for the wizard town’s protection and making sure their military is as trained as possible,  Zeke is the most serious of the group.  He’s a loner, tends to go on missions solo and is more prone to observe than speak.  But don’t make the assumption that he isn’t as deadly or more so than the other dragons on this mission.  That was a lesson that Zeke should have learned himself long ago.  Yet when he first meets the military commander of Falcon Cross at a banquet, instead of the stern man he discovers that Mac is actually a beautiful woman dressed in… sparkly, hot pink attire.  What the…?  This is their military commander, the one in charge of this wizard town’s protection.  They were in big trouble.  Well, Zeke should have learned to not judge by outward appearances by now – he was about to get a lesson in humble pie.

Mac knew the importance of letting the wizards see these dragon shifters as friends, allies … and not the sworn enemy of long ago.  Shifters and wizards have always been mistrustful of each other, yet recently they have definitely begun to merge their two separate people into a strong alliance.  She knew that this public gathering was essential to furthering that trust, even if one dragon in particular thought it was a foolish waste of time.  Or looked down upon her love of sparkly, hot pink.  Why did what she wear have anything to do with her ability to do her job, and do it well?  A shame really.  He was a handsome man, one she’d felt an almost instant attraction to.  Too bad he was also a jerk.

And so MacKenzie and Zeke meet and there could not be two people who are more opposite on the surface.  They each made assumptions that were terribly wrong and soon made the necessary adjustments in attitude.  The Commander and The Dragon brings the war directly to the wizard’s town of Falcon Cross.  While it’s true that the wizards have not had to do actual combat for lifetimes, that doesn’t mean that their military isn’t as fully trained as it’s possible to be in peacetime.  As the Redwood Dragons and the wizards of Falcon Cross prepare to do battle with their mutual enemy, Zeke and Mac begin to discover their mutual attraction.  Zeke never thought he’d find his lifemate in a wizard, but she was his and he’d do all he could to love her, protect her for their lifetime.

Full of danger, intrigue and moving the ultimate war closer, The Commander and The Dragon sets up more vital information about the enemy and what he’s after.  A few surprises, some definitely sexy moments and some powerful characters make this addition to the Redwood Dragons series an important part of the lore of this world.  If you love Shifter Romance or Paranormal Romance this combination of shifters and wizards is an intensely enjoyable series.  One I’d highly recommend.  It’s easy to get caught up in the stories and the people we meet.