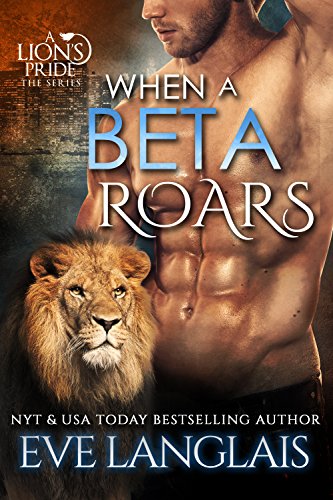 I had such a good time with Arabella and Hayder in When A Beta Roars.  Usually, Hayder is the joker of the pride, not taking too much completely seriously and he certainly thought “babysitting” the widow of a wolf pack’s Alpha was beneath him.  That was before he actually knows Arabella and he discovers that this lovely lady who, at the moment, is being harassed by her pack and had been abused by her former husband, is his mate.  Now, all bets are off and Hayder will do everything he can to show Arabella her own worth and to prove to her that this lion is worth fighting for.

Arabella’s abusive husband’s cruelty didn’t stop at his death – no, even from beyond the grave he’s controlling her life by leaving her a fortune and ensuring that every male in the pack will be after her because claiming her as their mate makes them the new, extremely rich Alpha.  Running away seemed the only hope, and the last thing she expected was to have this sexy lion protecting her.  Arabella is so beaten down that she can’t even find her own wolf anymore.  Hayder is about to change so much for her as she slowly realizes that she has power, far more than she’d believed, and she could go after what she truly wanted which is Hayder as her mate.

I smiled often at the banter between Hayder and Arabella, their chemistry is sizzling and the danger to be faced is very real.  I really enjoyed the lionesses of Hayder’s pride – these ladies know how to take care of themselves and teach Arabella how to stand up for herself without fear – no one doubts that these lionesses can take down and sweep the floor with anyone who crosses them, and that is a power, a self-confidence that Arabella really needs to understand and embrace.  In all, I enjoyed When A Beta Roars very much and would not hesitate to recommend this one to any reader who loves a good story, off the charts chemistry, a love story that is hard-fought for, and a couple that belongs together.  I’m looking forward to glimpses of Arabella through the rest of the series as I’d love to see how this she-wolf grows even stronger with the love of her mate and her new pride friends beside her.

I own a Kindle edition of When A Beta Roars

*Sometimes the TBR pile is annoying.  Yeah, it truly is.  I bought this entire series (well, to one point) several years ago.  And as TBR piles are known to do, the books piled up and got overshadowed by more recent titles.  This year I’ve made it a goal to go through my Kindle for any bought series and get them finally read and reviewed in 2020.  It’s a big goal but I’m a stubborn reader.  The A Lion’s Pride was one of those series that I loved the first book, went and bought the rest and… well, we all know about shiny things.  It’s now a nine-book series, but by the end of the year they will all be devoured, this I vow.*