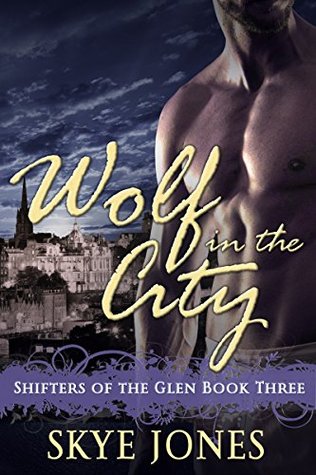 Handsome, confident, and cocky, Jake is one alpha wolf who knows what he wants. Nothing but some no-strings fun. But when he bumps into an intriguing human female during a trip to Edinburgh, “nothing” quickly becomes something he’s never experienced before. Something serious.

Cait never gets the hot guy. Partly, she blames herself for hanging around with two gorgeous supermodel types. So when hot and sexy Jake hits on her in a heaving nightclub, she doesn’t trust his motives one bit. What does a guy like him want with an ordinary girl like her?

One broken jaw, a hostile cat, and some sizzling fun later, Jake and Cait realize their connection runs deeper than either expected – just in time for danger to rear its ugly head and threaten not only Cait, but Jake and his pack, too.

Can they learn to trust one another and join together to destroy the forces ranged against them?

Jake has temporarily left the woods and the security of his wolf pack’s home to come to the city for one purpose only.  To discover if there are other human woman who exhibit the empathine traits.  Some of the men in his pack have discovered their mates in the human world, and these loving and unique women are definitely empathine – they have the ability to calm the wolves and mate with them as well.  Of course, there were trials to go through for these women to become pack members, but neither he or any other member of the pack would lose them now.  Since this trait is so very rare, Jake has come to the city hoping to.. well, sniff out other humans with that ability.  So far, he’s drawn a blank and is ready to return home with his mission unsuccessful.

Until he saw Cait at the bar and he knew she was empathine… and she was also his mate.  Now he simply had to show her that he was ideal for her as well and head back to the woods.  If only life were that easy.

Cait never understood why she let her friends talk her into going out to the bar.  The same thing happened every single time, her friends who were beautiful, tiny and skinny as a rail always got picked up.  While she sat on a bar stool and had to avoid the drunker pity pickup guys that did head her way.  She knew she wasn’t skinny but she still had a lot to offer, but that was rarely seen by any in this bar or elsewhere.  When Jake singled her out for attention she didn’t believe him, thought he was making some kind of cruel joke.  But he convinced Cait to give him a chance, to talk a bit over drinks.  Unfortunately, a bar fight broke out and Cait ended up being injured.  While it was horrible that she was hurt, it did give Jake the opportunity to take care of her as she recovered.  More time with Cait meant more time to convince her that he did love her and he did want a future with her alone.

I enjoyed Jake and Cait’s story so much.  She felt unwanted in her own world and through the love of Jake and his family she found her place, right beside the man she loved.  I’m looking forward to where the next story in this series takes us.