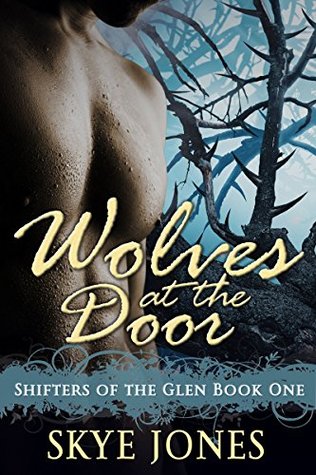 Research scientist, Brooke Buchanan, has agreed to spend a year studying the wildlife of a remote Scottish region. Alone in a wooden cabin with only her dog for company, she is determined not to be scared. But what she eventually finds living out there in the lonely woods shocks her to the core.

Sexy wolf shifter, Drew, knows the curvaceous female will be trouble, but he can’t resist her amazing scent. He seduces Brooke, and they spend a hot and sensual night together, but Drew wants more. He wants Brooke as his mate.

Disturbed by all she’s discovered, and overwhelmed by her intense feelings for the charismatic Drew, Brooke panics and runs.

Can Drew find her before it is too late?

Read on for m y thoughts on Wolves At The Door.

Wolves at the Door is such a fun, sexy and quick story that I have to be careful to not give too much away.

Brooke is staying in the small wooden cabin in the woods in order to study the flora and the wildlife in this small area of Scotland.  She has her dog for company and a few modern devices, but for the most part she is truly alone in the woods.  One night she hears tapping on her window, like a branch brushing up against the pane.  She didn’t think too much of it until the next morning when she discovered there were no trees near that window and saw several footprints and paw prints in the soft ground under her window.  She made a report to the local Ranger and vowed to be more careful.

That night the tapping began again.  Only this time when she made some comment about poachers a deep, rumbling voice answered her… from inside her room!  Those aren’t poachers, they are outside of the pack and your scent has drawn them here – just as it has drawn me.  Talk about scared speechless.

Drew is the son of the alpha of the pack that had outcast those outside her cabin.  With him inside with her, she would be safe from attack.  He explained that she was a rare human, an empathine meaning one who could understand and bring joy to the wolf.  In other words, she could become a true mate to a shifter and would be bound to them, and able to bear their young.  Let’s be honest, that’s a lot to take in considering there is a stranger in her bedroom claiming to be a shifter and he can protect her from other shifters outside her window who want to mate her… yeah, that’s a lot.

But something even odder is happening to Brooke – she is becoming sexually attracted to this stranger and it’s obvious how he feels about her.  Being a scientist and not afraid of new experiences, Brooke will give in to the temptation that is Drew… not realizing that in answering “yes” to his questions she has bound and mated herself to this shifter, forever.

Later, finally beginning to realize what she has done, Brooke panics and leaves Drew.  He allows her to go, as he will not force his mate to stay with him.  Those actions were big mistakes on both of their parts for now Brooke is in even grater danger alone and away from Drew.

I really enjoyed Wolves at the Door.  As I mentioned, it is a short read so you have a lot of story tossed at you quickly.  To be honest, this wouldn’t have worked so well, in such a short time period if it weren’t for the accepted instant lust, love, mating desire that comes with shifter lore.  And this couple definitely is smokin’ sizzlin’ hot in their sexy times.  Brooke’s alright with great sex, but she’s not believing in the mate thing and that is what sets her off running.

I was charmed by the small community of Drew’s pack.  They truly are an eco-friendly commune.  I am definitely looking forward to, at least, the next two stories in this series – I want to learn more about Drew’s pack and how they live.

Looking for a quick, yet definitely sexy Shifter Romance for those few free moments?  Then check out Wolves at the Door.  I think you’ll enjoy yourself.