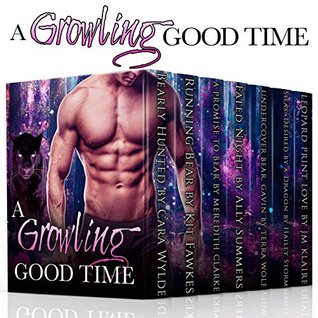 Curl up with seven alphas this winter and get cozy–if you can stand the heat.

Bearly Hunted: Cara Wylde
A retelling of Snow White
Nieve has always known her stepmother, the Queen, disliked her. But to go as far as to hire someone to kill her? No, it can’t be true… Even as the stranger who followed her into the woods steps closer to her, even as she begs him to spare her life, she still can’t believe what is happening is real. But it has to be, since the stranger is a bear-shifter. Everyone knows shape-shifters are assassins for hire.
“Bearly Hunted” is a sizzling hot standalone novella that might just set your Kindle on fire. Intended for readers 18+.

Running Bear: Kit Fawkes
When Wyatt turns his back on the world—and her—Gillian knows he’s hurting and needs time to recover from whatever wounds were inflicted on his bear by the military. He reluctantly accepts her help as they flee from a secret group sent to eliminate the shifter-soldiers involved in a black-ops experiment, though he’s determined to maintain an emotional distance from her. But bears mate for life, and his human mate is just as stubborn as he is. Nothing could hurt her more than losing him, and she’s just the one to help her wounded warrior move from the past and into the future—if they have a future…

A Promise to Bear: Meredith Clarke
Twila Jacobs has lost everything.
After her grandmother’s passing she is left picking up the pieces. Her main problem being Bear Lake Lodge. A place she hasn’t been in three years. When she left Jasper Blake.

Jasper has hidden his bear and pain about his rough upbringing for years. The one girl he opened his heart to left for Montana without even saying goodbye. Heartbroken, he’s waited years for her to return. But when she finally does, he doesn’t know if she’ll ever accept his bear side.

The two are forced into a business relationship, running the lodge, while trying to overcome both their pasts. But can they?

She thought she could balance life as a writer and as a magix, but she was wrong.

Someone knows her secret.
The clock is working against her as Ivy fights to protect what’s most important in her life. She must rely on her time travel spell to reveal the evil pursuing those she loves. But she can’t do it without the man who broke her heart.

Undercover Bear (Gavin): Terra Wolf
As part of an undercover shifter unit in an elite sector of Seattle’s police department, Gavin has spent his life serving his city. No one is above the law, and he does whatever it takes to protect the innocent.

Gavin’s assignment is to keep a tiger shifter safe until she is called to testify against the organization who kidnapped her. But his strength is tested. His bear is challenged. And his heart is vulnerable as he and Tasha wait out the trial together.

Desired by a Dragon: Hailey Storm
Silas LeFroy has been burned in the past, but his inner dragon can take the heat. Now he’s ready to move on however, he didn’t plan on the girl next door moving in. His dragon wants to claim her, but he doesn’t know where to start.

When Silas’s past catches up to him and Violet finds herself in harm’s way he has to make a choice. Stay stuck in the past, or let Violet ignite his future.

Leopard Print Love: J.M. Klaire
When their plane goes down in the middle of paradise, Callie, a jaded woman who’s decided that she doesn’t need anyone for anything, finds herself relying on Wade, a leopard shifter, more and more. Will trusting a man again, in life and in love, come back to literally bite her in the neck?

I think most readers enjoy the chance to get more books for their spending dollars, and I’m no exception.  The Growling Good Time bundle gives us one title from many series,  one from a serial and one stand alone title.

I have read them all and intend to do individual reviews on the titles since they are parts of several series.  I am hugely addicted to series and tend to read them until they are complete – eventually.  And yes, even the spin-offs.  I’m not a huge serial fan, so I’m not certain if I will continue the Spells of Fate series that Fated Night is part of.. we’ll see about that one.

I enjoyed all the titles in this bundle, of course, some more than others.  On average I’d say they got a 3.5 to a 4.5 star rating individually from me.

If you’re also a series fan, let me break down these titles for you… maybe you’d like to follow the entire series that they are a part of.

Bearly Hunted by Cara Wylde is the first story in the Fairy Tales With A Shift series.  There are 5 books in that series.

Running Bear by Kit Turnstall is the first story in the Wounded Warriors series.  There are 3 books in that series.

A Promise To Bear by Meredith Clarke is the third story in the Second Chance Shifters series.  There are 6 titles in that series.

Fated Night by Ally Summer is from the serial Spells of Fate.  There are 5 books in that serial… and there are cliffhangers at the ending.

Gavin by Terra Wolf is the second story in the Undercover Bears series.  There are 7 stories in that series.

Silas by Hailey Storm is the first story in the Desired by a Dragon series.  There are 3 titles in that series.

So, no matter what your particular Shifter Romance preference is, I believe you’ll find something in this bundle to entertain you – and maybe be introduced to your next new favorite author.