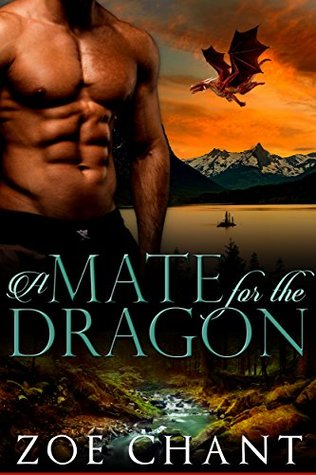 Dumped by her boyfriend and out of a job, curvy Holly Edwards just wants to forget about her troubles for a while. A peaceful vacation in a cabin in the woods seems like the perfect way to get some alone time and mend her broken heart. She thinks she can do without love in her life – at least until the drop-dead gorgeous Stefan walks into her life.

Dragon shifter Stefan Novak is the last of his clan – and unless he finds a mate soon, his lineage will die with him. But Stefan knows that even if he finds his mate, she too will be in deadly peril from the rival dragon clan who is hunting him. He’s made up his mind he won’t seek out his mate, even if it means he’ll be alone forever – but he doesn’t expect his mate to come looking for him.

The connection between Holly and Stefan can’t be denied, but old foes resurface, threatening to pull them apart. Can they survive the battle between rival dragon clans? Stefan’s enemies will stop at nothing to defeat him – even if it means threatening Holly’s life. Can he keep her safe and win her heart?

I really hope that A Mate For The Dragon one day becomes the beginning of one of Ms Chant’s series.  There are secondary characters that I would love to know what happens to, and I believe there is enough story line to make for a very interesting rebuilding of a lifestyle to make for a truly compelling  series.  Having read her works for a while now I know that often what began as a stand alone story grows into something more, so perhaps one day I’ll get those other stories that are lurking out there. *hopeful smile*

Stefan’s story begins as truly heartbreaking.  He’s lost his entire family, his dragon clan to a blood feud that he has no clue as to why it was started.  Granted he was a young man/dragon at the time, but even today as an adult looking back it makes no sense to destroy so many lives… for what?  His dragon is becoming harder to control in some ways as the day approaches that they must find their mate or be forever alone.  Stefan is torn between the need and desire for his mate, and the absolute terror of finding her only to place her life in danger along with his.  It’s something he and his dragon completely disagree on… but soon Stefan’s opinion won’t matter as events will be taken from his control.

Holly has come to this forest cabin as a retreat, a place to think and plan her future.  The future that is now totally different from what she’d envisioned.  As often happens to far too many women, she’d supported her inadequate boyfriend through unemployment, footed all the bills while he did nothing, opened employment doors for him that when his life changed… he no longer wanted her to be a part of it.  So now she’s been dumped, laid off from her job and at a loss to know where to turn next.  So two weeks in isolation is exactly what she needs.  What she also didn’t need was an encounter with a threatening, angry bear… until the stranger stepped in and saved her life.

Stefan knew immediately that he’d found his mate, and his dragon was doing one intense happy dance.  And as hard as he tried he couldn’t resist this lovely woman, or walk away when he knew he should.  He would have to tell her the whole truth and soon, for every moment she was in his arms she was in danger.

A Mate For The Dragon is an emotional story on so many levels.  I read a lot, and I’ve placed Erik into my Top Five Most Vile Villains of All Time category.  There is no good reason for this man’s existence, at all.  Beyond that comment I’ll let you read for yourself as to why I feel that strongly about this… thing.  Holly and Stefan are such a strong couple, they balance his dragon and her human so well that they form one united unit… and isn’t that what mates are supposed to be?  I loved them, and I really hope to one day learn more about some secondary characters who have touched my heart as well.  I would highly recommend this story for any Paranormal Romance or Shifter Romance reader.  This is one you’ll want to check out.