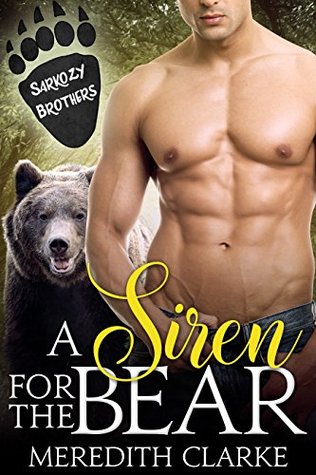 A Siren For The Bear begins Meredith Clarke’s new bear shifter series, Sarkozy Brothers – and what an excellent start it is.  I always expect the first story in any new series to have more background about the characters and their unique situation, it simply makes sense to me.

In this series opener, that background was expertly woven while falling right into the story.  And that is always a gem to find.  Marek is checking out Carson’s performance all the while knowing that he has a contract offer in his pocket.  What he didn’t expect was the pull he felt toward her.  He tried to shrug it off since his family wasn’t one that brought human mates into the fold.  Maybe long ago, but not recently.  So this attraction had to be simply a sexual response to this beautiful woman with a siren’s voice.  Or so he told himself, but deep inside he knew the truth – and it scared him enough to try to push it aside, to ignore it until he had no other choice.

Carson loves her voice, the challenge of writing and learning new songs, the thrill of performing – but she never expected to be offered a lead singer spot with a popular band.  And she certainly didn’t expect the hot, sexy and annoying messenger.  Sure he was handsome as sin, confident and sexy as all get out – and she wanted this job.  And she wanted him.  Things moved quickly.  When it’s obvious that there is danger around the wealthy Marek, Carson doesn’t hide from the fear – she is a strong, straight talker who sees the world in black and white with no shades of grey to be found.  To survive in Marek’s world she’s going to have to start believing in shades of grey.

There are obviously a lot of story threads beginning in  A Siren For The Bear.  Marek’s family is old, wealthy and influential.  They have protection in place and are searching for something.  There are several offshoot operations that get a slight mention, that will find their ways into later stories in the series.  That’s what I mean by background building but subtle.  A word here, a sentence there, a hint of something evil over there – touches, soft glancing words that tell us that there is so much more to this world to discover over the course of the series.

Carson and Marek’s relationship is sexy, intense and not without some serious drama.  But the feel of this couple is that they belong together, they simply have to find their way… and trust each other.  I enjoyed this story very much, am looking forward to the rest of the series and would not hesitate to recommend it to any Paranormal Romance lover who enjoys sexy partners, mystery, action and a very solid story line.  Give this one a chance, I believe you’ll be hooked for the entire series.

( parts of this review were previously posted on another of my review blogs – KEEPER BOOKSHELF   Both reviews were written by me.  I simply want to keep all Shifter series under one blog roof and this original post was a NetGalley post that had to be published on Keeper Bookshelf )