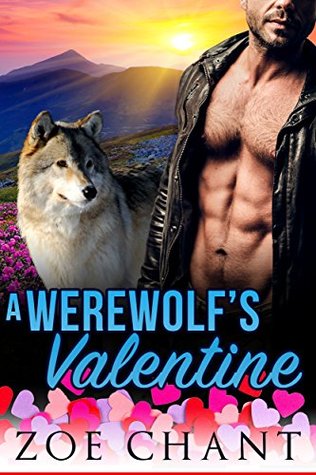 Curvy cat shifter McKenzi Enkel gave up on love after one too many heartbreaks. What’s more, she declared war on Valentine’s Day. But then a handsome, whiskey-voiced stranger comes to town.

Sexy singer West, a lone wolf who lost his pack as a child, never stopped searching for his missing family. He sings when he can, fights when he must, and always moves on—until he meets the scorching hot McKenzi in the diner she reluctantly decorated for Valentine’s Day.

In a small town of shifters where anyone can find a refuge, West and McKenzi still feel alone. But as they begin to open their hearts to each other, he can’t make himself leave… and she can’t let him go. With Valentine’s Day approaching, can West and McKenzi forge a new pack… and find a love even they can’t deny?

Shifters enjoy showing their love for their mates in hot, sexy ways – a lot, so this tale is for 18+ readers.

Read on for my thoughts on A Werewolf’s Valentine.

If you have read Target:  BillionBear already then you are in for a treat as we return to Upson Downs to visit with the good citizens of that charming, shifter town once again.  This time we will be watching Kesley’s sister fall in love, even though she doesn’t really believe in that elusive emotion much anymore, and catch up with some of the goings on in the village of such a fun variety of shifters.

McKenzi absolutely hates Valentine’s Day.  It’s a phony, sparkled up lie that only makes those folks without a special love in their lives wonder even more at the very existence of a mate.  But McKenzi doesn’t realize that fate is sitting right in that booth over there, ready to rock her world and prove that love finds you when you’re ready for it and not one minute sooner.

West is passing through Upson Downs, bringing his music and not much else with him.  He’s a lone wolf searching for his family, his pack.  He may never find them, but he won’t stop wandering until he does.  Enjoying a good hot meal for a change, West overhears the sexy waitress bemoaning the many ways that she hates Valentine’s Day and it gives him a smile.  Her voice is playing notes in his head and even now he’s writing her songs.  He knows he shouldn’t hang around, but there is something about this woman that touches places in him that hadn’t seen the light of day before.

A Werewolf’s Valentine is such a delightful, slow burning kind of a love story – oh, the sexiness and attraction between McKenzi and West are anything but slow, those feelings are burning up the sheets hot – but the love that is slowly coming over them is of the slow burn kind.  Neither trusts much in love but both long for and search for it.  There are many ways to create a family, a pack… and that is exactly what West is unwittingly doing.  As he becomes involved with the townsfolk and gets to know and trust them his wandering days aren’t quite so important for now.  Right now he’s exactly where he needs and wants to be, with this strong sexy woman mapping out a future that may be crazy but it’s one that is working for them.

It was such fun returning to this village full of the most wonderful Shifters, and to experience a love story like McKenzi’s and West’s.  I’m already looking forward to the next visit to Upson Downs.