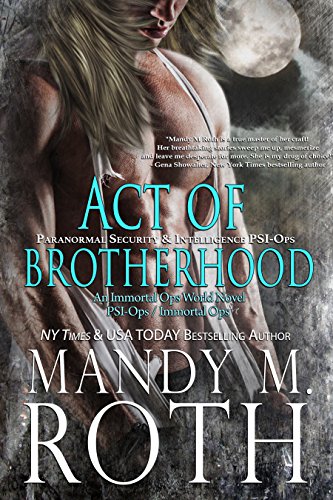 Act of Brotherhood is the sixth title in the PSI Ops series and brings us Garth’s story both discovering his mate Nicolette and the confrontation with his evil twin brother, Grid.  Although the subject is heartbreaking, I did love the way this story opened, twenty years in the past which gives us a good look at what is to come… but also sort of gets lost in the present day happenings so that when events happen, secrets are revealed I was tempted to go “Oh, yeah, that’s right – I should have known.”

Garth is a stubborn wolf-shifter, a Viking through and through, an ancient who has seen so much during his long lifetime.  Right now he’s making a pest of himself at an injured friend’s bedside and is convinced to try out another of those infamous injections that the docs come up with.  Maybe he should have remembered what happened to the last guy who agreed to test out a drug.  He’s sent away on assignment, a low-keyed one but still out of everyone’s hair for the moment.  The last thing he expected was to run into his mate, actually, run into her on the sidewalk… or to once again encounter a face from the past, one he shares but has no love for the evil being that his twin has become.

Nicolette and Clara are best friends forever, share a living space, and believe they know just about everything about each other – well, they once did but now Clara is keeping her own secrets that she’s not quite ready to share.  Nicolette has no idea that she carries supernatural DNA – but she’s about to find out.

The action is fast-paced, the chemistry between Garth and Nicolette off the charts in steaminess, and the evil has sadness connected to it as well.  Surprises are in store for many of the members of the various Immortal Ops teams, and they will need to adjust attitudes accordingly.

I enjoyed Act of Brotherhood, although I will confess to skimming over one particular part (reading maybe every other sentence) because I was impatient to get the men moving already.  Now I have a few more stories to look forward to given the information that was dropped in this story.  That should prove very interesting.

I read this title through my Kindle Unlimited subscription.  Yet, as of November 2020, these series are coming out of KU and will be available across several vendors.