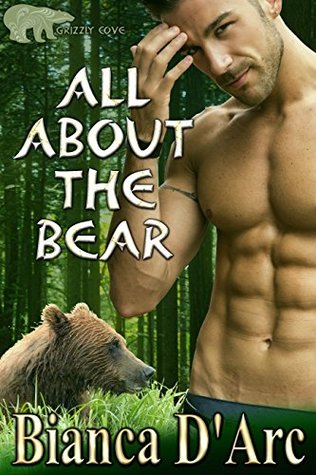 Welcome to Grizzly Cove, where the sheriff has more than the peace to protect.

The proprietor of the new bakery in town is clueless about the dual nature of her nearest neighbors, but not for long. It’ll be up to Sheriff Brody to clue her in and convince her to stay calm—and in his bed—for the next fifty years or so. Yeah, that might be enough. Then again, maybe he’ll keep her forever.

Titles in the Grizzly Cove series include:  All About The Bear – Mating Dance – Night Shift – Alpha Bear – Saving Grace – Bearliest Catch -The Bear’s Healing Touch – The Luck of the Shifters – Badass Bear – Loaded For Bear

Grizzly Cove is part of the overall Tales of the Were universe which consists of several smaller series with some characters who overlap.  I didn’t find it necessary to have read all the other series in order to start and enjoy this one.  (but knowing myself I’ll eventually go back and start from the very beginning)

In an all shifter town designed that way by shifters, they’d made an exception for the human sisters who set up a bakery shop in Grizzly Cove.  While the majority of the world has no idea that shifters exist, this small town is seen as an artist’s colony with lovely artwork, a down home feeling and a picturesque location.  That is about to change because of one drunk bear and his actions.

Brody has been attracted to Nell since she and her sisters moved to town.  But he cannot imagine keeping half of himself a secret from her so he’s been content with stopping in to her shop for lunch several times a week.  Just to make sure she’s safe, of course.  When a stranger to town shows up in Nell’s shop and does something stupid – well, Brody’s options go out the window, as well as the town’s secrets.

Nell and Brody’s romance is quick, sexy and without drama.  We meet a few of the other members of town, but this story felt very much like an introduction to the town type of romance.

All Abut The Bear was a short, enjoyable read.  Yet, I’m not completely sure at this point if I’ll follow the series to the end.  I usually do not admit to that upfront, but while this first story is fun and entertaining – without some conflict, some villain to overcome, I do not know if a simple yet lovely boy meets girl, shows her his bear, she accepts and they live happily ever after is enough for me.  It seems that the dangers of the shifter world draws me more than I thought it did.  I’ll pick up the next story in the series, Mating Dance, and see how I feel after that one.