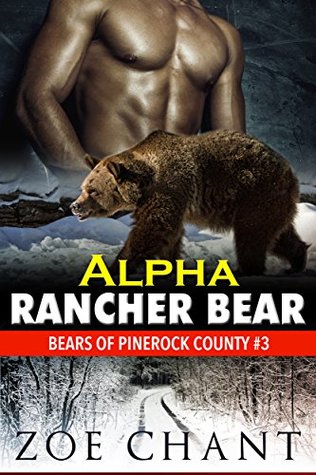 Alec Tanner isn’t looking for a mate. The tough, reclusive alpha of the Pinerock County bears likes his life just fine. Even if his solitude is because of his emotional walls rather than actual desire to be alone. Even if there’s a part of him that can’t help but envy the companionship his clan brothers have found with their mates …

Charmian Russell can’t imagine letting a man into her life. The Pinerock County midwife is doing just fine on her own, thanks, and she doesn’t want a boyfriend to boss her around. Especially not an infuriating (but smoking hot) alpha like Alec Tanner. Even if he does make her weak in the knees …

But when their car goes off the road in a snowstorm, suddenly these two proud, controlling people have to rely on each other if they’re going to make it back alive. And there’s nothing like trying to keep warm in a blizzard to make it harder to fight the sizzling attraction pulling them together. Can they learn to let someone else in, and find the happiness they’ve been missing?

Read on for my thoughts on Alpha Rancher Bear.

Alec never realized that when he took his cousin Remy’s mate, Saffron to her midwife appointment in the middle of a snowstorm that his life would change forever.  Knowing what we do of Alec, he probably would have stubbornly refused – sometimes being a stubborn, bull-headed Alpha can get in the way of the good things in life.  When he got his first look at this midwife time just stopped.  Charmian seemed to be just as affected by the large, grumbling Alpha in the clinic’s waiting room.  But she was going on instinct, Alec’s bear was bellowing …Mate.  And Alec simply wasn’t prepared for that, at all.

Even tho he hadn’t left the best first impression on Charmian, she was interested and a simple forgotten pair of gloves made the perfect excuse, or reason to head up the mountains to the Circle B Ranch.  One perfect afternoon, filled with flirting, and some sizzling intimate moments was enough in Alec’s mind to bind them, his bear’s protectiveness took over soon after the wonderful wore down to reality.  Take two stubborn, strong, independent people in the aftermath of some serious loving and just try to tell one of them what not to do.  Yeah.  Alec was in deep trouble before he knew what hit him as Charmian stormed off of the ranch.

Eventually even the perpetually thick headed get the message that if he wants this amazing woman in his life, and he does, then he’s going to have to make the moves and a few changes to win her over.  When their spontaneously planned date is interrupted by a woman going into labor, Alec goes along with Charmian.  There are blizzard conditions, and the snow is falling rapidly but baby waits for no one.  Almost to their destination, a steer step onto the snow covered hilly road and sends Charmian’s Jeep off an embankment to tumble down leaving them both injured and stranded.

It’s in the time that Alec and Charmian tend to their injuries, seek shelter and await rescue that they truly get the chance to express what makes each of them tick  And the affection that binds them together isn’t something to fear but to embrace.

Up until now Alec has been the stern, unbending, gruff and at times, mean spirited Alpha of his small clan.  In the previous two stories in this series we got little tidbits, small comments about what might be behind Alec’s behavior.  Now we get to see what lies behind the stubborn Alpha, what made the man who he is and perhaps he begins to realize that we make our own destinies and change is not always a bad thing.

I really enjoyed Alec and Charmian’s story.  So many questions answered, but still more stories to come.  If you enjoy Shifter Romance then this is a story that should be on your reading radar.