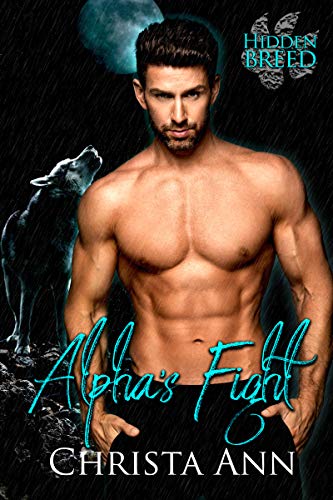 ALPHA’S FIGHT is the first story in Christa Ann’s new series, Hidden Breed.  It’s an intriguing look at the shifter world with some unique touches that are sure to capture readers attention.

There is world building in this first story, and as you settle into this world you’ll understand why there has to be a structure created for the shifters we know and the unknown new shifters who have been in existence without other shifters knowing about them.  But someone does know, and they are out for blood.

Both Trent and Arianna are strong stubborn characters.  That they work perfectly together is a given, but individually they each have their own unique skills and abilities.  Trent is still trying to wrap his mind around the fact that he’s found his mate, let alone the unusual circumstances surrounding Arianna and her family’s existence.

You are going to meet a lot of people in ALPHA’S FIGHT.  Arianna and her family, Trent and his pack, the other pack leaders that were involved both before and now, as well as the extremely bad guys at the heart of all of this.  I didn’t even try to keep everyone straight aside from remembering which side they were on.  Most, if not all, will one day have their own tales told and by then I’ll be more comfortable with all the characters in this large cast.

There is danger here both from within and outside sources.  Definitely steamy moments, intense times as packs face off as they settle down to accept the mating of Trent and Arianna.  There is also a lot that I feel I cannot reveal for that would include spoiler information which I try not to do.  This story is a fascinating introduction to the series, and I will be following it for I now want to know what happens next.