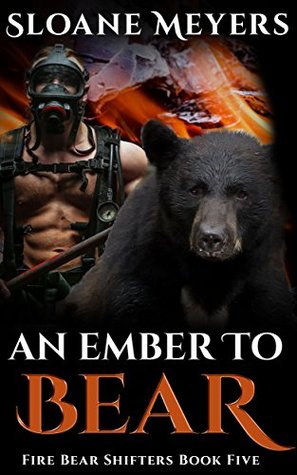 Mindy Olsen has faced some tough times, but she’s always been determined to rise above them. She’s worked hard for her dreams, and, when one of the biggest desires of her heart is on the verge of becoming a reality, she’s elated to see her perseverance paying off. But everything comes crashing down around her when the gorgeous but bad-mannered smokejumper she recently met turns out to have a startling secret—a secret that could rob her of everything she’s fought for.

Bear shifter Zach Brooks is a bitter, broken shell of a man. He doesn’t trust anyone, especially anyone who’s not a shifter. So even though the cute nurse he meets makes his heart beat faster, he does everything he can to push Mindy out of his mind. When he can’t seem to get away from her, he decides to run away instead. He thinks his only option is to leave behind Mindy and his clan to find a new life where no one knows his name. But when Mindy’s future unexpectedly intersects with his past, he’s forced to rethink everything he believes about destiny and trust.

Read on for my thoughts on An Ember To Bear.

Zach has been a royal pain in the butt since we first met him and he’s gotten progressively meaner and more vindictive as each member of his Bear Claw Clan finds their human mate.  It’s been understood from the beginning that something life altering happened to Zach to turn him into the man he is today.

While I suspected what that might have been, I was totally floored when I learned the extent of his personal torment and betrayal.  While that didn’t give him the right to b e a total jerk, it did explain why he acted as he did.

An Ember To Bear is the conclusion to the Fire Bear Shifters series.  And I believe it is the best of all of the stories, mainly because the build up to understanding Zach has been included in every single story to the point that we almost desperately needed to understand why this guy was so horrible to friends and strangers alike.

On this review I’m not going to rehash the story, you have what you need to be teased into it in the cover description.  This is one that you need to read firsthand in order to get the impact of   Zach’s reasons and how his life will change with Mindy involved in it.  This story is an emotional roller coaster that you need to hop onto and ride until the end.  It is an amazing story.  I cried and I finally understood the pain that Zach has been living with.  I rejoiced with Mindy only to fear that her dream would be shattered just when it began.  Yeah, this is one you really need to experience.  Although I do have to say that I don’t feel you would get the same impact if you haven’t read the entire series.  Because the build up to Zach’s story is a thread throughout the series and you won’t see his slow burn into utter madness and despair unless you’ve taken the journey with him, in my opinion.

(This title was first reviewed on my Haunted Bookshelf blog.  I wanted all of my shifter romance reviews to be in one place, so this was brought over to Shifter haven.  Both reviews were written and created by me.)