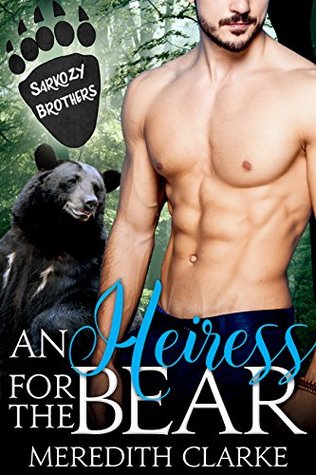 The Cover Description for An Heiress For The Bear is a great tease to let you see if you’d enjoy this story – so I’m not going to add much more to what’s been well done.  🙂

If you’ve followed the series so far, then you’ve met Kat before.  She’s Carson’s friend and roommate.  Interestingly the last portion of Carson and Marek’s romance in A Siren For The Bear is the beginning portion of Kat and Lukas’ romance, seen more from Kat’s perspective.  It was very cool to relive some scenes from another character’s view point.

Kat is keeping secrets from her boss at the law firm where she works.  She has no intention of letting anyone know that she is the grand-daughter of a powerful, extremely wealthy man.  She won’t follow her grandfather’s dictates, does everything she can think of to not walk his path through life – so to acknowledge that relationship is less lying than it is – just not who she is.  She works pro bono for clients who truly need her expertise and the designer clothes she wears are there to instill confidence, her knowledge and compassion provide the legal way out of the troubles that life has heaped onto them.  That she might be just a bit interested in her sexy boss – well that’s between her and her imagination.  Right up until she makes a shocking suggestion.

Kat’s grandfather had left the majority of his fortune to Kat upon his death.  Which makes Kat a bazillionaire many times over – in fact, she couldn’t spend that money if she had ten lifetimes.  But she doesn’t want it and she finds the perfect way to not only use the unwanted money, but to send her grandfather spinning in his grave.

Lucas has secrets too.  His bear is of course one of them.  But how his law firm actually operates is another.  When Kat gets a first hand taste of what actually is happening to their clients – she has the perfect solution for all of that unwanted cash.  But again, more secrets, so she sets up a donor, an un-named donor who will be very generous.  Trouble is… Lukas wants to know more, and he’s sniffing around Kat interested in so much more than the name of their wealthy patron.

An Heiress For The Bear is such a fun read.  Lukas is beyond sexy – he’s nice as well.  And, yes, I often find “nice” very sexy.  Kat is so determined to not let her secrets out that she doesn’t realize the secrets that are right in front of her face with Lukas.  There is suspense, more family drama from the Sarkozy troubles and another very uppity, very determined female shifter who thinks she should get the guy… don’t think so girlfriend.  We get a bit more information of the dive search – and another twist at the very end will most likely lead us into the next story.  There are no cliffhangers, but this is a series so some threads will be woven over several stories until they eventually are concluded.

I’m enjoying this series very much, and now I’m in waiting mode for the next one.  I won’t even guess who might be up next, each member of the Sarkozy family is fascinating and I’m sure has quite a story to tell.  If you love Shifters then this in a solid, good and intriguing series that you’ll want to experience for yourself.