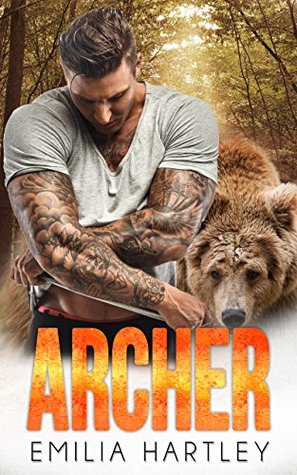 I certainly hope that Archer was the first in an un-named series for now I need to know Gage and Cohen’s stories as well.

Archer is brought back to his home, to his pack by a mysterious phone call.  He certainly would have liked to ignore it, but the message was far too clear even for his stubborn hide to ignore.  Yeah, he’d made a huge mistake years ago, one that set his and his brothers’ feet on a path as the ousted sons of their pack’s Alpha.  It didn’t take Archer long in the outside world to realize he’d made the wrong choice, but going back was not an option.  It only takes a few minutes in his hometown for Archer to realize just how badly things have become.  And worst of all is seeing the woman he was supposed to marry before his rebellion treated as she was now.  Joanna was a strong woman not this eyes downcast shell of her former self.  He needed answers – and someone was going to pay.

Once upon a time Joanna had been in love with Archer.  The announcement that they were to be wed to unite their packs was the most welcome news in her world – until he left her at the alter and walked away into the human world instead of marrying her.  She was hurt beyond belief and made some poor choices in the years after.  The worst mistake was standing in her home, had taken over her pack after destroying her family.  Somehow she had to save the remaining members of her pack and she was very afraid that she couldn’t do that without Archer’s help.

Archer is fast paced, intense and gripping.  It is a compelling story that grabs hold of your imagination and will not let go.  Archer, Cohen and Gage are all interesting men and I really hope to learn more about Gage and Cohen in more stories.  Joanna is such a combination of strength and sorrow, fiery determination and hopelessness, she’s a fascinating character and I followed her journey with emotions on high.

I completely enjoyed my time in this world and would recommend Archer to any Paranormal Romance or Shifter Romance reader.  It’s the type of story that will keep you glued to the pages with your heart pounding.  Yeah, I’m hooked and hope to read more about this family of grizzly shifters.

(at the time of this review this wasn’t listed as a series, that  has since changed – Outcast Bears includes Archer, Gage, and Cohen’s stories)