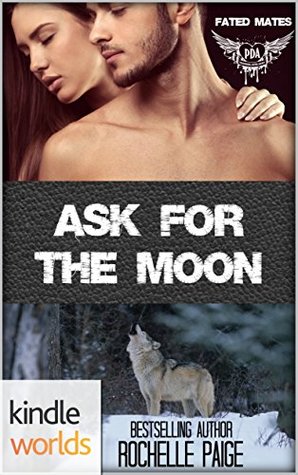 Seth Bashar carries the weight of the shifter world on his shoulders as the head of their council. Or at least it’s felt that way ever since he attempted the impossible—uniting witches and shifters. As he tries to maintain the delicate balance, finding his fated mate is more vital than ever.

Jane Smith has no responsibilities to anyone but herself. Finally. She’s more than happy to fade into the woodwork. When her favorite customer, Gerri Wilder, insists on setting her up on a blind date, she reluctantly agrees.

It was only supposed to be a harmless night of fun… until it was more. Until he was everything.

Ask For The Moon is an intense, sexy, and at times, heartbreaking story of finally finding your future.  As head of the shifter council, Seth simply hasn’t had time to search for his fated mate.  Oh, he has no doubt that she’s out there it’s a matter of finding time in between the new crisis that always pops up at him.  With some friendly, good natured teasing from his friend Seth will take a chance on a matchmaker finding his mate for him.  It couldn’t hurt and it would certainly save time.

Jane is a lone wolf who has had a horrendous experience with her former pack.  A heartbroken young woman for several reasons, Jane firmly believes it is her fate to live out her life alone.  Until her favorite customer, Gerri Wilder, has another suggestion.  So, sure, one date and Gerri would leave her to her solitude once again… except Jane didn’t count on Gerri’s uncanny ability to match up fated mates.  And Jane was about to discover the surprise she never believed possible.

It was so easy to get caught up in Ask For The Moon.  Intense, quick pacing puts you right in Seth and Jane’s story immediately.  Both Seth and Jane are characters I’m drawn to – Seth is certainly a strong alpha and more than willing to take on anything that harms his mate.  Jane is a wounded soul who had been lied to by one vicious member of her former pack.  In her grief she believed his lies, it took the love and strength of her mate to allow her to find out the truth.  There is never a doubt in your mind that these two belong together.  I’d recommend this story to any Paranormal Romance or Shifter Romance reader who loves strong characters, interesting secondary characters and a villain worthy of being loathed.