Posted May 18, 2017 by Marsha in Shifter Connected, Shifter Series / 0 Comments 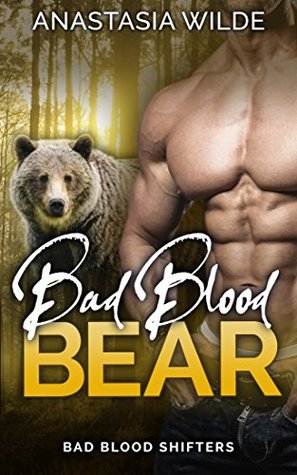 Now we return to the Silverlake universe for the stories of Flynn and his broken group of misfit shifters.  This woman, these men have been so tortured, so driven to the edge of insanity that it’s possible they’ll never come back, including Flynn.  In order to survive they have to come together as a true, viable crew.  And the catalyst that will bring that about is just as, if not more messed up than any of these survivors.

Bad Blood Bear is such an emotionally intense story.  It’s not just about two broken people finding their way to each other over seemingly insurmountable odds… although that story is intense, heartbreaking and liberating just the same.  It’s also about these shifters taking back control of their lives again.  Yes, they’ve been released from torture and captivity.  Yet in many ways their animals are still fighting, still dealing with what they’ve gone through.  The term “broken” truly does apply to each and every one of them in some fashion.

Lissa and Tank make such an interesting couple.  Lissa is such a powerful character.  Oh, don’t mistake the horrible things that she’s gone through as all she is – no, she finds her strength within this crew and in her relationship with Tank.  And watching that unfold was truly a joy for me.  Tank is a complex man who feels deeply and cannot let go of what was – even though none of what happened was his fault.  This protector bear has gone through so much that for awhile he lost that protector capability.  To watch him find himself again was priceless.  I enjoy seeing broken people find their way again, it gives hope for anything that follows that moment of clarity.

To talk about the events of this story would be so very easy, but that would rob you of the chance to experience this first story in the Bad Blood Crew series for yourself.  I enjoyed revisiting this world very much, Bad Blood Bear is an excellent beginning to the new series.  And I’m certainly looking forward to the rest of the crew’s stories.  I don’t believe you really “have” to have read the earlier series to enjoy this one… at least what I’m seeing so far doesn’t feel that way.  Yet, those earlier stories are so rich and entertaining… and in some ways set up this new series that I’d strongly suggest that you indulge yourself and read them as well.  I would definitely recommend this story to any Paranormal Romance or Shifter Romance reader.  You’ll find an intense story, likable characters, interesting situations, a very nasty villain and secondary characters you’ll want to learn more about in their own stories.