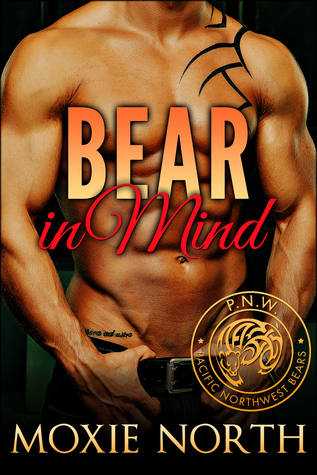 Waiting patiently for his destined mate was not a high priority for Wyatt Rochon even if it was for his bear. He and his brothers ran a successful timber business and life was too busy to go hunting down The One.

Fate finally steps in to bring Wyatt together with curvy state analyst, Jinger McCann. Her life doesn’t have many ups and downs until she meets Wyatt. Finding a boyfriend usually doesn’t come with so much family drama.

Before they can settle into a life of love, logging, and cubs, Wyatt must discover how to protect his mate and family against unknown forces trying to harm them.

One small mistake could cost him and his bear their future happiness.

Read on for my thoughts on Bear In Mind.

Bear In Mind is Wyatt and Jinger’s story, the second in the Pacific Northwest Bears series.  Wyatt sure gave Cage a hard time when he found his mate in Sophie – now it’s time for big brother to have a good chuckle.

Jinger is a government worker, one who is following up on an anonymous complaint about the family logging operations.  The moment Jinger steps out of her car, Wyatt is definitely interested but there’s no spark just a sexy, curvy lady.  And Wyatt does what he does best, flirt and charm the lady while taking her to the location she needs to inspect.  It’s not until later, over lunch served at Sophie’s mess hall that Wyatt and Jinger lock eyes – and everything in Wyatt’s life falls into place.  His mate.

Jinger is a woman of conflict.  She’s attracted to Wyatt, is she ever.  But her vision of herself, her body is far different than his.   Where Wyatt sees curves and lusciousness, Jinger sees belly rolls and a stretched out uniform.  She cannot believe that he possibly sees her as desirable or loveable.  To be honest, this is a theme throughout the story of Jinger’s insecurity about her body.  I had hoped that with Wyatt’s love she would become more secure in her own skin – perhaps in time.

An accident that wasn’t really an accident sends Jinger into the hospital.  And we begin to see people from other shifter clans enter the story, as the mystery of the tampering and sabotage done at the logging company continues.

Bear In Mind is a fast paced, sexy love story.   And one that is completely charming and fun to read.  These guys and their bears are such fun to watch as they deal with mates and their bear’s reactions to the chosen woman.  This is an enjoyable series and if you love paranormal romance, especially shifters then you will love the Pacific Northwest Bears.