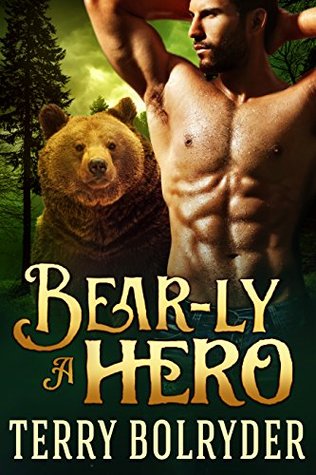 Josh “Limes” Harris is good with computers, great at fighting, terrible with people. As an accomplished hacker for Bear Claw Security, he’s used to providing support from the office…and never leaving it. So when he’s forced to take a bodyguard job because the client insists on hiring him, he’s one grumpy bear. Especially when the client mistakes him for one of the bad guys and attacks him. Limes is ready to walk away, until he realizes the sweet brunette with killer curves that just swung at him might just be his mate.

When Jamie insisted on hiring the tech guy at bear security, she was hoping to work with someone quiet and nerdy and unassuming, unlike the other big, bad bears there. Instead, the tech guy turns out to be the most intimidating of all, a giant bear shifter with tattoos, bulging muscles, piercing green eyes and a permanent scowl. He’s determined to stay and protect her, and with the forces on her tail, Jamie doesn’t have much choice. Even if men like Limes, tall and hot and intimidating, always make her want to run and hide.

But the longer they’re together, the more Jamie’s fear is turning to attraction for her sexy, strong protector. And Limes feels that Jamie brings out sides of him he didn’t know existed. He’s truly falling for the gorgeous girl he’s guarding. Now he just has to keep her safe long enough for them to have a happily ever after.

Shifters and their mates are extremely sexual in their showing love to their mate – so this one is an 18+ story.

Read on form y thoughts on Bear-ly A Hero.

The cover description pretty much gives you Jamie and Josh’s (Limes) story in a nutshell.

Jamie is being stalked, and also followed – she has an idea of who is after her, and why.  Those details don’t quite make it to her bodyguard at first however.  Jamie has reason to be afraid of those who were after her, but her fear translates into anyone who is bigger than her, stronger than her, or simply intimidating.  Pretty much every guy at Bear Claw Security, and Limes was the biggest guy there – which if she’d not demanded to have the company computer hacker as her bodyguard she might have realized that sight unseen isn’t always a good way to make choices.  You know those stereotypes – computer nerd hacker = small, skinny, geeky safe guy.  Ah… no.  Not always.  And Limes wasn’t all that much better, to be fair.  He is most definitely not a people person, and his grumpiness is obvious especially after being attacked by his client.  He’s the good guy, dammit.

I enjoyed Bear-ly A Hero very much.  Usually I like a strong female (or mate) to our obvious hero – and Jamie was everything but strong.  I kept waiting for her to show her stuff, and in some ways she did but she wasn’t as strong a woman as I’d usually expect in a Shifter Romance.  Which just goes to show that we shouldn’t make assumptions, even about characters.  We aren’t all strong all the time.  We have times when we just cannot stand up for ourselves or we’re more submissive than we might otherwise be.  Sometimes life just beats us down and we are not strong – but that doesn’t always equal weak.  Just because Jamie was afraid of everything didn’t mean that she couldn’t be stronger when she needed to be.  No, Jamie is certainly  not a kick butt heroine, but with Limes at her side I’m betting she’ll be stronger over time and maybe in future stories.

If you love Shifter Romance I would definitely recommend checking out Bear-ly A Hero or the entire Bear Claw Security series.

Available in Paperback and for the Kindle