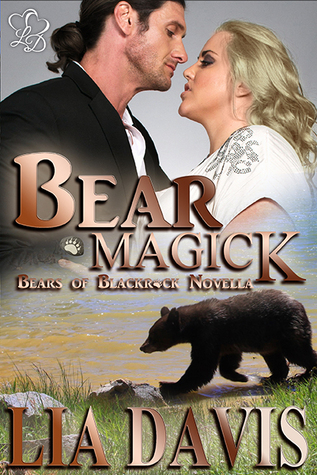 Bear Magick is a sexy story of Anthony and Connie’s romance, Trey’s brother and Nichole’s best friend from Bear Essentials, the first story in the Bears of Blackrock series.  It’s a very short novella, so I’m going to have to be a bit vague in order to avoid spoilers and hints about the next story in this series.

Connie is a witch, no really she’s a magickal witch and she’s known that the handsome Marshal of Blackrock is her mate for some time now.  Anthony is pretty certain that Connie is his mate, but he’s busy keeping an eye on the town of shifers and the surrounding area to devote as much time to her as he should be.  Connie was recently assaulted by a creepy hunter when he ran up on them.  Okay, she had the situation in hand but dammit she was his to protect and she didn’t need to get all huffy about his showing up.

In truth, Anthony and Connie just need to stop dancing around each other,  teasing and implying – and declare themselves. But characters never listen to me when I’m yelling at them – thanks the stars -they just continue on their stumbling into love ways.

The threat that Anthony and Connie thought they’d run off is closer and much more dangerous than they thought.  As true evil rears its ugly head, the threat to the shifters of Blackrock increases.  Connie and Anthony’s bond is strong, but it’s going to have to go deeper real fast.

I enjoyed this addition to the Bears of Blackrock series very much.  It is extremely fast paced, action filled and sexually intense.  You can easily read this novella in one setting and experience an really good story – plus get set up for the next story to come.  Not a cliffhanger, so don’t worry about that, but there are enough events happening that you simply know they will be part of the rest of the series.  I can’t wait to start the next one.