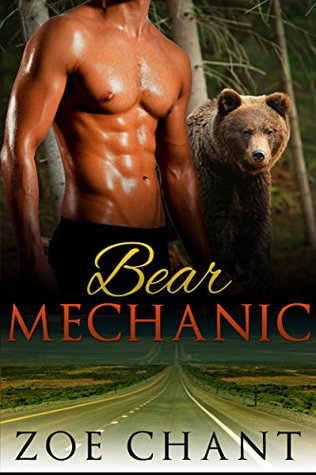 Curvy Elise Robbins is having the worst day ever. She lost her job, a gang is threatening to harm her little brother if she doesn’t hand over the money meant to put him through college, and then her car breaks down in the middle of nowhere… in a storm. But just when she thinks she’s hit rock bottom, the strongest, sexiest man she’s ever seen pulls over to fix her car…. and, if she’ll let him, her life.

Bear shifter mechanic Noah Hawley can’t say no to a woman in distress. In fact, he can’t say no to anyone who needs help, which is why he’s assembled a team of misfit shifters, from a former Special Forces dragon shifter with a secret to a playboy tiger shifter race car driver. But brave, curvy Elise isn’t just a stranger in need of assistance… she’s the fated mate he believed he’d never find.

But she’s got more problems than a broken transmission. Can she trust him enough to let him help her, and let him into her life? Can he and his team save her and her brother from a gang that’s way more dangerous than anyone expected? And can two independent, lonely people admit that what they really need is love?

Noah will never hesitate to stop and help anyone along the side of the road… or anywhere else for that matter.  Especially when the person in need is a beautiful woman looking defiantly and helplessly under the hood of her obviously broken down car on the side of a dark roan on a very stormy night.  The defiant he gets, because he’s a stranger and she’s alone so this little mouse is trying to roar for his benefit, but the helpless won out in the end.  Yet the one thing Noah didn’t expect in this act of mercy was to discover that the lady in trouble was his mate.  And his lady was obviously in more trouble than a broken down car should account for.

Elise was panicked and desperate.  The last thing she needed on this horrible day was for her car to die out here in the  unknown woods on a dark, stormy night.  When a stranger pulled up behind her car she had no idea if he was friend or a member of the gang that had threatened her earlier in the day.  So she’d fake it to survive whatever was heading her way.  The only person she could depend on in this world was her little brother, Cecil, and he was missing.  She’d fight anyone, including this stranger if necessary in order to find him, hopefully safe and sound at their grandfather’s cabin.  What she couldn’t know yet was that this stranger was her mate, and he would move through hell and high water to protect her and anyone dear to her.

I really liked the diverse group of shifters that Noah has pulled together into a team that helps the helpless.  They are a crazy bunch and exactly who you’d want by your side during any kind of trouble.  I sincerely hope that this group is turned into a series where we get to learn each shifter’s story.  They are all intriguing, powerful, a bit of an attitude and sexy as sin.  Yeah, I’d love to learn all of their stories.

Noah and Elise’s chemistry is solid and they make a believable couple as they set out to find Cecil and take care of the gang that is threatening them permanently.  It’s not going to be an easy fight, but with the entire team behind them Elise and Cecil have a fighting chance to survive.

I enjoyed Bear Mechanic very much and would not hesitate to recommend it to any Shifter or Paranormal Romance reader.