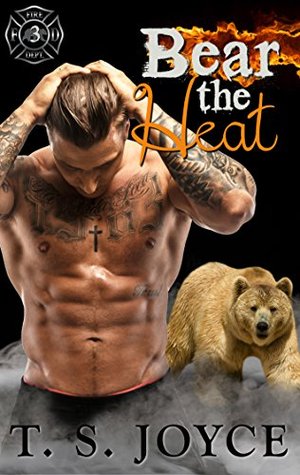 Cora Wright is walking a fine line between standing up for what’s right, and keeping her job secure. As a local news reporter, her need to defend the Breck Crew of newly outed bear shifters risks everything she loves about her life. But when she meets Boone Keller, tatted up bad boy bear shifter, her world tilts dangerously on its axis. And the more he lets her into his secret life, the harder she falls for a man she isn’t supposed to love.

If Boone wants to keep the fiery news reporter he’s been secretly coveting safe, the friend-zone is where she’ll have to stay. He’s been doing a bang-up job of avoiding the woman who has been publicly rallying for his crew, but a chance meeting with Cora is killing his reserve. And when she shuts down his attempt to push her away, he’ll have to decide whether to draw her in close to protect her from his secrets, or cut her loose to save her life.

Read on for my thoughts on Bear The Heat.

Bear Shifters have been outed and the public reaction to the news is definitely mixed.  Cora Wright was there from the start, right when one of the men released his bear in order to save the life of his mate.  She offered the solid suggestion that they say nothing more at that time, anything they said in that moment would affect how the world viewed them later.  It might have seemed an extremely odd thing for a TV reporter to do – but from the start Cora viewed these shifters differently than a news story.

Boone noticed Cora that first fateful night.  He knew what she was to him.  And his first reaction was – no, no way.  He did his best to fight his attraction for Cora.  Trouble was he ran hot and cold around her, but nothing changed what he and his bear knew or how Cora didn’t back away from him.  She was his mate and while keeping her safe was his biggest concern, keeping her close soon became a necessity.

The controversy and the dangers continue for the Beck Crew in Bear The Heat.  As the world slowly adjusts to the knowledge of shifters, those directly involved are learning a new reality.  While many of the people they’ve lived their lives around rally for them, support them and defend them – the other side of the coin is a fear, hatred and prejudice against the unknown that is gaining momentum.  The IESA will not leave these men alone, and once again they will try to harm members of the Beck Crew.

The one strong, constant supporter of the shifters is Cora Wright.  She has no fear of them, not really.  Oh, sure it’s hard to not think twice when a huge bear shows up right beside you, but she knows who is inside that bear, even if her natural fight or flight reactions sometimes kick in.  And the closer she gets to this amazing family, the more she falls in love with Boone, the less that reaction happens.

One of the most touching scenes in this combined series happens near the ending of Cora and Boone’s story.  Cora has put together a special news report, one that will show the shifters in a light that will begin to change some people’s minds.  Other’s fears will never change.  We also get some cameo appearances by the Ashe Crew, touching moments that keep the connection between series alive in a very relevant way.

I enjoy this combined series so much.  Characters that I care about, a detailed, interesting story line, an actual plot and love stories that are hot and sizzling along with the emotional need the couples have for each other.  A tight knit community and an ongoing story that reflects the times we live in (yes it’s fiction – but haters are haters whether real or fictional).

If you love Shifter Romance, then this is a story and a series that you should get caught up in.