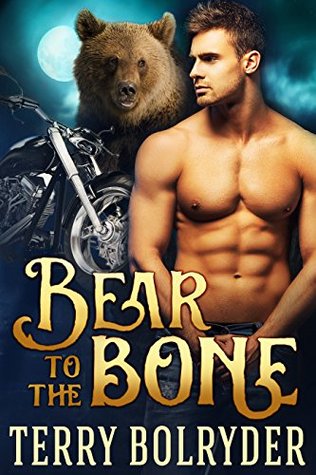 Cage McCann and Carrie Miller go way back. As kids, they meant everything to each other. But Cage left town years ago to escape his future as leader of the local motorcycle gang, the Aces, and though he promised to come back, Carrie has given up on seeing him again. Until he shows up at her bar and pulls her into a sensuous, soul-shaking kiss and back into his life, which is currently full of danger and secrets beyond what Carrie can imagine.

Cage has never forgotten Carrie. After serving in the special forces and then starting up a private security company, he has just been waiting for the right time to go back, claim her as his…and tell her that the man she has always loved can actually shift into a bear. But when Carrie is in danger from the very biker gang he tried to escape, Cage drops everything to protect her. The only problem? In order to make sure she is never in danger again, he has to go undercover as an Ace.

Making Carrie fall in love with him while wearing Ace leather isn’t going to be easy, but if Cage blows his cover, he risks losing his chance to rid the town of the Aces once and for all. Now Cage will just have to prove that the Aces may be bad to the bone, but Cage is bear to the bone, and no one messes with what a bear holds dear.

Read on for my thoughts on Bear To The Bone.

Bear To The Bone is action packed and carries quite an emotional wallop as well.  Carrie and Cage have an amazing connection from childhood which you’ll discover in the very beginning of their story.  While Carrie doesn’t yet know that Cage is a shifter, still there is a bond there that she feels no matter their age, or how long they’ve been apart.  She knew life wasn’t easy for him as the son of the leader of the motorcycle club, Aces.  In fact, it was downright horrible and in truth she was glad for Cage when he entered the military to get away from that life.  She missed him, wrote to him and if she dreamed a bit of his coming back to rescue her that was her secret to keep.

When Cage did show up at the bar, the last thing she expected to see was him wearing Aces leather.  The disappointment almost outweighed the joy at seeing him again.  For whatever reason, the club wanted Carrie’s bar, come hell or high water or worse.  She wasn’t about to sell it to them, and knew that soon they’d start using other methods to get it.

Cage pleaded with her to not believe everything her eyes were telling her – he was back in town for her, to make life better for the townsfolk but he couldn’t tell her the details or the complete truth right now – she had to trust him.  The love she felt for him was still strong, and she did trust him – but until he could be straight with her and tell her his truth, her trust could only go so far before she took matters into her own hands.

I loved Carrie’s strength and loyalty – I adored Cage’s sense of right and the determination to be more than his past, to make a difference in his world.  Together they bring a story that is touching, passionate and full of danger.

The beginning to any series is always full of back story and getting to know the characters, main and secondary.  We had a good mix in Bear To The Bone with just enough information about Cage’s partners in the security company they’d formed to be looking forward to their stories being told.

I would easily recommend this story and series to anyone who loves Shifter Romance.