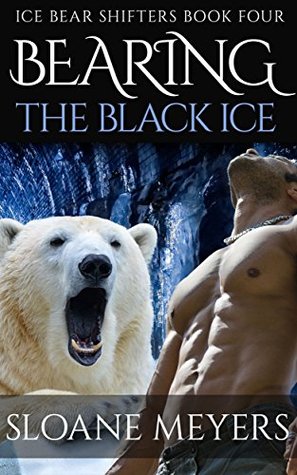 Hannah Miller has always had a stubborn streak. But after being separated from her family and tormented by a ruthless rival clan, she’s beginning to lose her tenacity. And just when things seem like they can’t get much worse, she finds herself trapped in a remote Alaskan cave with the aloof, antisocial Alan. Hannah gives up hope of ever being rescued, and resigns herself to spending her last days with her gorgeous but standoffish new acquaintance.

Alan Jensen has been a bitter shell of a man since losing his life mate and unborn cub in a poisoning tragedy. But when an unfortunate accident lands him stranded with the beautiful, spirited Hannah, he starts to wonder if a future of happiness might still be possible for him. Before he can sort through his feelings for Hannah, however, he has to figure out a way to get them both out of the cave—or risk certain starvation.

Can Hannah get past Alan’s rough exterior and help him open his heart to love again? And will Alan find an escape route before it’s too late?

Read on for my thoughts on Bearing The Black Ice.

Kat was determined to help her new clan mates in their fight against the rogue killers the Blizzard clan.  She was certain they were hiding somewhere in the ice caverns outside of town.  She was on a search for an entrance – Alan was along as protection and in his mind as ‘humoring her’ clan mate.  They were looking for an edge over their enemies.  What they found was a disaster.

When Alan crashed through the surface into the cavern below he knew he was in trouble, but maybe not that his life was about to change.  As Kat ran back to the cabins for rope and help, Alan settled in to wait – until he heard voices, screams and one very, very angry bear shifter.

Hannah has been separated from her clan by the insane Blizzard clan, captured by these lunatics but she won’t give up her clan’s location.  So they keep taunting her, roughing her up and tossing her deeper in the caverns.  She knows that she’ll die here, she’s never going to get out – but she won’t give up her clan.  For all she knows the people she cares about are already scattered to the far winds and she’d never catch up with them even if she could escape.  The last thing she expected to find down here was another bear shifter – and not one of the Blizzard clan.

Alan and Hannah will fight their way out of the hideout of the Blizzard clan.  Eventually.  Right now they’re simply trying to survive on limited food and an unknown maze of small caves, rooms and lots of black ice.  This place is called Black Ice Cavern because of the deceptive walls within the caves.  Some are mere thin ice that could be shattered to expose an escape behind… but finding that escape route won’t be easy.

When Hannah tells Alan about the Blizzard’s plan to go after some cub that’s about to be born, thinking it will give them a break from discovery. Alan knows they are going after Kenzie’s cub who is due any day not.  This will fuel his determination to get out of the cavern, no matter the risks.

I enjoyed the tenseness of Bearing The Black Ice.  For me, this is a a pivotal story in the series.  Through Hannah we’ll have contact with another clan that has fought against the Blizzards and the attack on Kenzie’s cub, and the future of the Northern Lights Clan will bring about some changes in tactics from Neal.  This one is a turning point.  An exciting story, a couple who will form their bond under the worst circumstances – and don’t let a little ice keep them from melting it with some hot sexy times.  Alan will risk his heart a gain, something he never expected to ever do.  Yes, this one was a very intense, exciting story in the Ice Bear Shifters series.