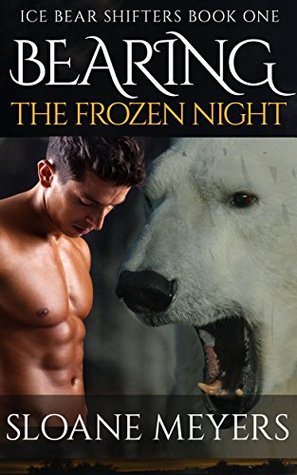 Kenzie Atwell doesn’t settle for anything ordinary. Which is why she jumped at the chance to take a job as a veterinarian in the wild outskirts of Alaskan civilization. She came looking for adventure, but soon found herself feeling alone and isolated in the harsh Arctic winter.

Ryker Pearsons seems at first glance like just another one of the quiet, reserved men in Glacier Point—but he’s hiding his own secrets and pain behind those gorgeous eyes of his. When he finds himself caught at death’s door, Kenzie is his only hope for survival. But first, he’ll have to trust her with his deepest secrets.

Can Kenzie save Ryker’s life? And can he save her lonely heart?

The Ice Bear Shifters series takes place in Alaska – but there is nothing cold about these bear shifters, in fact look for some pretty hot, long, long winter nights which means 18+ readers.

Read on for my thoughts on the introductory story in the Ice bear Shifters series.

At one time Ryker’s clan, the Northern Lights clan was one of many polar bear shifter clans living in Alaska.  One rogue clan, the Blizzards has eradicated most of the other clans in a wild, unspeakable slaughter.  Five members of the Northern Lights clan survived, one Alpha and four other men – alone they have blended into a small human community looking for survival.  The clan’s Alpha has decreed that there will be no human mating, his mistrust of humans is extreme but he will keep the remaining members of his clan safe.  But without mates it is a lonely existence for them all.

Kenzie has traveled to the far North as a veterinarian.  Perhaps Alaska wasn’t the warmest or most sociable location but she was learning so much here – even if she could do with some non-animal companionship by now.  She is attracted to a security guard at the only big box store around – and while he seems interested, he hasn’t made a move to change things between them.  Kenzie has no way of knowing that Ryker is extremely attracted to her, but he’s already taken a cuffing from his Alpha for his interest in her.  And loyalty to the Alpha is everything within a shifter clan – even when you disagree.

When Ryker comes under attack from Blizzard shifters he is left close to death and reaches out to the one person most on his mind to help him – Kenzie.  He should have reached out for his Alpha, but it was his mate’s touch he craved especially if he was to die this night.

You will immediately notice something different about this first story, Bearing The Frozen Night.  For those of us who love Shifter romance we are very, very much used to dealing with Alpha Males – maybe I should make that all caps because the Alpha is always the strongest, most powerful of the clan.  He must be.  But we are accustomed to all Shifters, in many way being Alpha-ish, even if they are not the Alpha.  Bearing The Frozen Night gives us a look at a slightly different aspect of clan life.  Ryker is the youngest of the surviving clan.  And his loyalty is to his Alpha first, he gets cuffed, yelled at, swatted around for his interest in Kenzie, but ultimately he will obey his Alpha’s orders – which is no human mates.  Eventually his Alpha will change his mind, especially when he discovers the type of woman Kenzie is, loyal and true to Ryker.  But this may make Ryker appear less in some reader’s minds – Not Mine, I Love Ryker… but knowing the reading community who love their Alphas – some might.

Don’t dismiss Ryker easily.  He is a fierce protector of his clan – he can take out multiple polar bear shifters set on killing him alone – he is not weak.  But he is obedient to the power order of his clan.  It takes a strong man to put himself under the power of another – simply keep that in mind.

I enjoyed the beginning of the Ice Bear Shifters series very much, and I’m looking forward to continuing the rest of the stories in this series.  Kenzie and Ryker make a strong couple who will only strengthen the entire clan.  Plus they are definitely hot together.