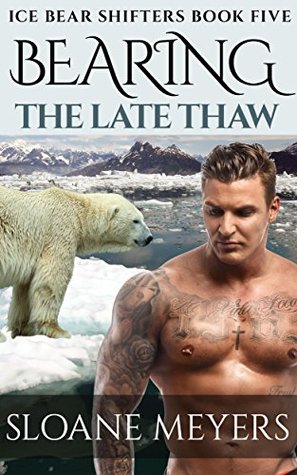 Attorney Christine Cook has spent the last several years doing the boring grunt work at a huge law firm, and she’s fed up with the grind. So when her firm offers a bonus to anyone willing to take on a remote job in Northern Alaska, she jumps at the chance to get away for a while. When she meets Neal, a sexy tattoo artist, she’s excited to spice up her stay in Alaska. But Christine soon discovers that Neal has a startling secret, and all she wants to do is run away from him as fast as she can.

Neal Ray has a lot on his mind. As alpha to a group of polar bear shifters, it’s his job to protect his clan. But with multiple attacks from an enemy clan—and no leads on where they’re hiding—Neal feels like he’s failing. He spends every waking moment worrying about his bear shifters, and he definitely doesn’t have time for a woman. Especially not when that woman is human. But after Christine unexpectedly discovers his shifter side, he can no longer ignore his romantic feelings for her. So when Christine makes it clear that she can’t accept who he is, Neal is ready to give up on love. Little does he know that Christine holds the key to his clan’s survival.

Can Christine see past Neal’s rough edges in time to help him save his clan? And can Neal take another chance on loving a human?

Just because there’s ice in the water, don’t be thinking that these shifters aren’t hot n sexy – definitely 18+ readers

Have you been waiting for Neal’s story?  Me, too.  Read on for my thoughts on Bearing The Late Thaw.

Finally – Neal’s story.  The Alpha of the Northern Lights Clan finally finds his mate – and she is human.  Pay back.  🙂  After the cuffing and scolding he gave Ryker when he knew that his mate was human – yeah a human mate is just the perfect girl for our polar bear shifter.

Christine makes a play for the gruff tattoo artist but he’s not wanting to play.  Since she’s up in Alaska working almost nonstop in an old warehouse going through documents a little romance would have been perfect.  But she’s discovered another exciting pastime – snowmobiling.  It’s weeks after Neal’s rejection and lots of time to be almost too comfortable on the snowmobile that Christine finds herself in danger — and the first time she witnesses the reality of polar bear shifters.  And realizes that she tried to hook up with one.

The very last person Neal expected as his mate was Christine.  In fact he was so certain that he couldn’t be mated to a human that he ignored her and gave her a very convincing brushoff.  Yet, when he heard her scream, he knew his mate’s voice.  But now that she knows what he is – she wants no part of him and practically hides herself away in work at the warehouse.

Yet, Christine likes the woman of the Northern Lights Clan – and some of them are human.  It’s so confusing.  When she finds a map buried deep within the documents she’s been going through that just might be the answer Neal is looking for in their fight against the Blizzards – she doesn’t hesitate to tell him.

I don’t want to spoil the final confrontation with the Blizzards.  But if you’ve followed this series so far – this is one that you cannot miss.

Remember Hannah?  And her clan mates?  The two shifters who were the last remaining members of Hannah’s clan still alive were adopted by the Northern Lights Clan.  Bearing The Late Thaw was originally to be the final story – but Seth and James will get their stories told as well.  Look for those reviews in a short time.

I have loved the Ice Bear Shifters series.  Hot, Sexy, compelling, romantic, exciting – just a really, solid good series.  If you haven’t experienced it yet – what are you waiting for.  🙂  Enjoy.