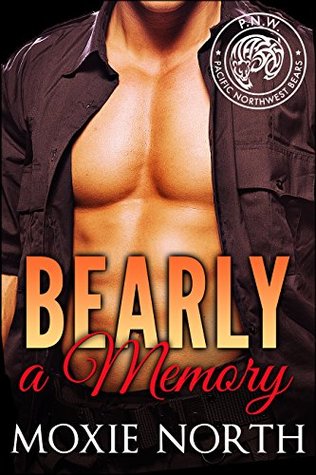 Brooklyn Nishi likes order, and stability, and following the rules. Then she has to run for her life — and everything familiar vanishes in an instant.

Bear shifter Tanner Rochon loves his family and the little patch of Washington he calls home. As sheriff of Apex, it’s his job to protect his community and keep the peace. When he finds a strange woman in the woods, he knows two things: she’s in trouble, and she’s the mate he’s always wanted.

Tanner and his bear are more than ready for the challenge Brooklyn presents. But is she ready to leave behind everything she’s known and start a new life with him? And will trouble of a more lethal kind come looking for her?

Read on for my thoughts on Bearly A Memory.

As Sheriff of Apex, Washington, Tanner Rochon has found his perfect spot.  It’s what he’s always wanted to do, the lumber business never interested him but staying close to his large family did matter.  And as sheriff he could do a bit more to protect his family’s special abilities.  Life was good, and if he was getting a bit itchy about finding his mate, well he trusted in the fates – he simply wished they’d hurry up a bit on sending him that perfect woman.  Little did he know that a mischievous extended family member would help put his mate in Tanner’s direct path.

Brooklyn had been in the wrong place at the very worst time.  Being a witness to a killing in her hospital’s ambulance bay sent her on the run for her life.  She couldn’t go home, because someone had already been there.  So she withdrew cash from savings, rented a car and took off – where she didn’t know but it had to be far away from San Francisco and the men there who would kill her on sight.

She’d been staying in a small motel in the tiny town of Apex.  Surely here in the near wilderness of Washington state she could take a breather and think of what to do.  Taking a walk in the woods near the motel to simply think, the last thing Brooklyn expected was to run into a bear – and she did run away, too bad that she fell and hit her head on a log and remembered nothing.

Tanner had felt the pull of the beautiful woman he’d rescued from the creek.  He didn’t know why exactly, but his bear wanted to be at the hospital with this woman not here investigating who she was and what happened to her.  When Tanner had gathered the woman’s identification from her motel room he finally gave in to his bear and headed to the hospital – only to get the surprise of his life when he looked into the eyes of his mate, and realized that she had no idea of who she was or why she was running.  How in the world was he going to get his mate to accept him, fall in love with him since she was clearly human, when she had her own troubles to deal with?  He had no clue, but he knew one thing – this was his mate and he would do everything in his power and beyond to protect her come what may.

I really enjoyed Tanner and Brooke’s romance.  She is one sassy lady who takes nothing from anyone… even though she cannot remember much about her life before the accident.  But she knows one hot sheriff when she sees one that for certain.  Tanner and his family are in protection mode and until answers finally emerge from her memories Brooke is tentatively enjoying spending time with Tanner.

We will run into Cassie again, that wonderful purple haired pixie and her giant of a man Cash.  I adore Cassie and her no nonsense acceptance of what the  Rochon family consists of.  She sets Brooke straight on several points and becomes the friend that she desperately needs right now.  Tanner should probably thank Cassie for the slight push she gave to Brooke to accept his bear and all that comes with loving a shifter.

If you love Shifter Romance, then Bearly A Memory is a sexy, hot, intriguing and simply fun story that adds more to the Pacific Northwest Bear series.  I would definitely recommend this one and any of the other stories in this series.