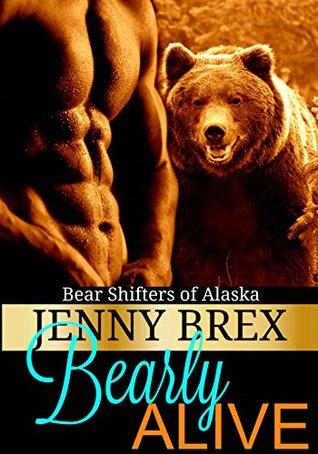 The sweet smell of her skin called to me. She was strewn across the forest floor like a broken angel. I hoped it wasn’t too late. Her once silken hair stuck to her face, matted and caked in blood. I moved in closer and listened carefully. Relief rushed through me. She was breathing, but barely alive. I knew I had to save her.

When I find out who’s responsible, I’ll hunt them down like the savage beast I am. Nobody capable of doing this to another is deserving of their life. I’ll extinguish them in the blink of an eye, and the world will be a better place.

As for the woman, I’ll claim her for my own.
Mine to keep.
Mine to love.
Life in the Alaskan wilderness can be lonely – but it won’t be for me.
Not anymore. Not if I can help it.

Titles in this series include:  Bearly Alive – Bearly Legal

The idea of Bearly Alive caught my initial interest.  A young 14 year old is kidnapped and kept hidden and used as a “wife” for a decade.  When she finds a chance to escape she is caught then beaten to the point of being near death and tossed into the Alaskan wilderness, which is where she is found by the hero of this piece.  She is taken to his cabin and tended until she awakens and begins to share her tale… and I thought this story was going to go in a different direction, but it didn’t.

I don’t DNF books, I’ve found too many times just as I was about to, well the story turned around so I suppose I look for that now when I’m tempted.  Yet, for me, Bearly Alive never turned around from a direction that I simply could not enjoy.  I’m sure there is an audience, but this one simply wasn’t for me.  When I’m left with the impression that Lily has exchanged one captor for another, I was dealing with a very uncomfortable feeling.  And please save me from asinine friends like King, within five minutes he had changed the perception of an okay guy to a total creep.  Nice going friend.  I really do understand the intent of all of this, but it didn’t work for me – it might work for you.  Only you can decide that.  This is the first in a series, I haven’t yet decided if I will be following it or not.