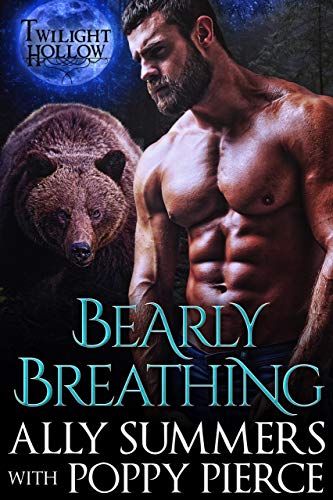 ‘Bearly Breathing‘ introduces us to both the town and the series of ‘Twilight Hollow‘.  Jonas left Twilight Hollow after an extremely bad breakup, his despair, his anger (at himself) drove him away when he couldn’t trust himself to be in his hometown where she was.  As an Alpha, Jonas knew he needed control, and he certainly didn’t have that ability then.  It’s time to come home, even though he still is hurting, and angry.  Events are falling into place where his concerns about a corrupt wolf pack making a move on his town are becoming a reality – so Jonas has to get control again, and he will in his own time.  And perhaps with the help of a stubborn human who just might be his true mate.  But first, he has to heal himself and hope that Rose will still be around when he’s whole once again.

As a human living in a mostly shifter town, Rose isn’t unaware of the nature of those around her, or her customers but Jonas is an unknown, a fascinating unknown that she is drawn to no matter what her logical mind says.  Watching Jonas slowly release his anger, begin to heal from the past as he starts to see Rose as his future was a fascinating journey.  He’s Alpha enough to know that he is the only one that can heal him, that has to come from within but Rose certainly is a factor in how complete that healing becomes.  There are the beginnings of threads that, I’m thinking, will be woven throughout this series as it continues.  I expect worldbuilding with the first story of any new series so this wasn’t surprising. ‘Bearly Breathing‘ is an introduction to this new series, it paints the background not only for Jonas and Rose but the other people we’re introduced to just enough to draw me in for more as these stories are released.

There’s definitely steamy chemistry and sizzling sexy times for Jonas and Rose – but there’s also a tender, growing love happening just beneath the pain and hurt.  Seeing this couple work their way to that was magic.  The threat to the town is growing and now Jonas and Rose are in a position to begin the fight to save this precious place.  I’m looking forward to reading how this develops, and hopefully, Jonas and his Rose will be back for more visits along the way as their bond deepens over time.  I enjoyed myself in this world and will definitely be keeping an eye out for the next release in the ‘Twilight Hollow‘ series.