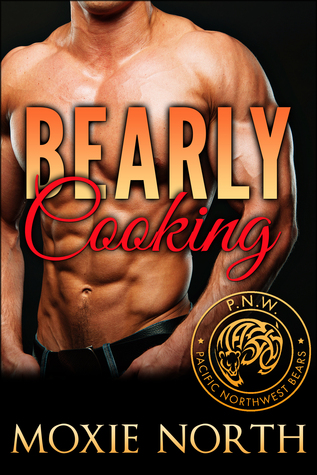 With a taste for adventure, a desire to feed people that would appreciate her cooking, and a need to escape her stodgy British family, Sophie Carlton takes a chance. When the opportunity appears to brave the wilds of the Pacific Northwest and become a cook in a remote logging camp, she thought it was the biggest and bravest decision she had ever made. Until she met Cage.

Rochon Enterprises grew the trees, logged them, and milled them. For generations the family had kept close to home in the wilds of the Olympic Peninsula. Cage Rochon and his brothers loved the land and needed the protection it provided to keep their family secret.

Cage has been waiting a long time for his fated mate and his bear was becoming restless. Then he locked eyes with Sophie, the curvy new cook for the camp. Their fates were sealed with one look.

Bearly Cooking is the first story in the Pacific Northwest Werebears series.  A delightful, sexy and fun group of novellas about three brothers who run their family logging operation in the wilds of the Pacific Northwest.  And they just happen to be werebears, only a kinda unique group of brothers.  They want what their parents have a long, loving relationship.  Taking their cue from their parents, they are waiting for that one woman who is without a doubt their mate.  Sure they have physical needs, they’re guys.  But no girlfriend, no friends with benefits, no messy breakups when they know that the woman involved is not their fated mate.  Their father tells them that they will know, like a thunderbolt out of the sky, there will be no doubt.

Sophie comes from a very well to do, wealthy  British family.  A family that shows no emotion aside from disappointment and where the strongest emotion shown is the parent’s distaste for each other.  Sophie has  never fit in.  She’s brunette, curvy and wants nothing more than to cook for those who enjoy her efforts.  No high maintenance marriage of convenience, no specialty chef position handed over to her by her parents request.  No, Sophie wants so much more out of life – and she set out to find it, on her terms.

Sophie has traveled halfway around the world, far from her London upbringing to the wild forests of the American Pacific Northwest.  Her job as cook at a logging camp will involve feeding 50 or so hungry men breakfast and dinner.  It sounds like the perfect start to tackling life on her own terms.

It takes Cage a few days to find the time to meet the new cook he’d hired.  Mountains of paperwork kept him tied to his desk, but he had already tasted her heavenly cooking.  When Sophie is injured on the site by a sabotaged piece of equipment, Cage is the first to reach her side.  One look, one sniff was enough to know she was his.  Dad was right, there was no doubt.  Now to keep Sophie safe, and convince her that she belongs to him, oh, and his bear.

Bearly Cooking is a fun, sensuous and sexy story.  One with handsome men, luscious bears and a woman strong enough to take on anything life tosses her way.  I loved Cage and Sophie’s story and look forward to the other brothers stories.