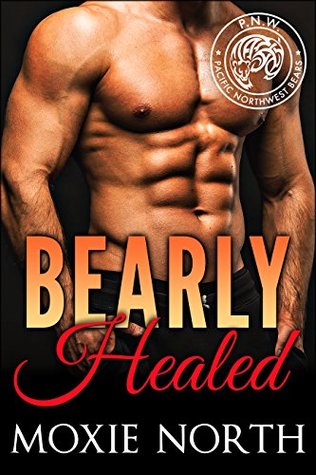 Beware of shifters bearing cheese puffs…they might be about to steal your heart and make you whole again.

Cassidy Hackett knows all about life’s hard knocks. After growing up in foster care, her only family is her friend Effie, who sees past Cassie’s sarcasm to the heart she shields so carefully.

But now Effie is mated to a cougar shifter, and Cassie feels left behind. When a fateful decision to drown her sorrows one night leaves her broken and scarred, she’s almost ready to give up on life.

With one burly, sexy man …

Grizzly shifter Cash Rochon loves his family and his job. But it feels like he’s been searching forever for his mate–that special woman meant only for him.

When he hears about a human recuperating from a terrible accident at a relative’s house, he’s glad to help out. Little does he know that his greatest wish is about to be answered … in a way he never expected.

And lots of patience, devotion, and peanut butter cups?

Cassidy needs to heal inside and out, and it won’t be easy. The one thing that keeps her going–not that she would ever admit it–is Cash, who refuses to give up on her.

He’s willing to do whatever it takes to coax his sharp-tongued pixie out of her shell–even indulge her junk food habit. Cash wants nothing more than to show her the love she’s always needed. But after a lifetime of wearing emotional armor, is Cassie ready to lower her guard?

Read on for my thoughts on Bearly Healed.

I have been waiting for Cassie’s story.  Understanding the type of wild child with a heart of gold, and a very scared girl behind the mask she wore for anyone outside of her comfort zone of close friends – I knew that Cassie would need to have a gentle, strong and understanding mate waiting for her down the road.  And she found him in Cash.  Knowing how close she is to her best friend Effie and Effie’s husband, Dax I figured that Cassie’s mate would be a cougar shifter.  Thank the fates I was wrong.  What Cassie needs is the gentle giant of a grizzly bear shifter, Cash.

When Effie and Dax had headed to a family Christmas, this time Cassie was left behind.  Effie would have taken her, but the secrets of the people they would be staying with were not hers to give away – even to a woman closer than a blood sister.  Unfortunately, that feeling of being abandoned by her best friend led Cassie to going out and drowning the emotions with so called friends at a bar.  Knowing she was too drunk to drive she handed her keys over to someone not so drunk – a bad decision all around.

The resulting injuries and scars from the car accident have left Cassie with a hide in a hole attitude.  Yes, she got looks because one of those scars was on her face – and she could not stand the pity.  At their wits end on how to help their friend, Effie and Dax made arrangements for Cassie to stay with the Rochan bear shifter clan who were extended family to them.  Hoping that Connie and Edward would be able to help Cassie heal, they left her in their tender, no nonsense care.

Cash had stopped by his aunt and uncle’s place with the thought of welcoming the friend of Effie’s to the area and offering his help.  What he never expected was to catch a scent that sat his bear up straight searching for the woman attached to that sweet, candy smell.  Since Cassie was determined to hide in her room, Cash made the decision to take a napkin-full of cookies to her window and talk to her under the cover of night and the protection of the walls she was still behind.  One touch of her hand and Cash knew –  but he had to see her to be one hundred percent sure.  So when one of the twins came into Cassie’s room, crawled up on her bed and onto her chest – and decided to shift into her bear, well let’s just say that the resulting shriek got Cash the chance to see his mate in person a lot sooner than he expected.

From that second on he knew that he had finally discovered his mate.  Now the difficult part – convincing Cassie that she belonged with him, overcoming her fears and easing her into the knowledge of what they were to each other was the hardest, most delightful job Cash had ever taken on.  The results would be having his mate at his side – once he convinced her that is.

I absolutely, freakin’ loved Bearly Healed.  Cash is exactly what Cassie needed to finally see her own truth worth.  They are funny, cute, and un-bearably  (pun intended) hot together.

The bonus of this story was to meet up with characters from Pacific Northwest Werebears andPacific Northwest Cougars again – and to be there when Effie and Dax’s baby was born.  This story was simply the perfect wrap up to this series (maybe there are more stories – but this put the cap on several connected characters for me).  I don’t often gush in reviews – but I did love Cassie and Cash – theirs is a perfect, understanding, accepting love.

I would strongly recommend Bearly Healed for any reader who loves Paranormal Romance..  There are a lot of characters from previous series (see above) very much like a reunion I feel.  So while this is an amazing story, if you haven’t read any of the previous stories then it might get a tad confusing as to who belongs to who and such… you could read this and come away with an enjoyable experience – but in my opinion, that experience is going to be so much more if you know everyone’s back story.

(This review was originally posted on my Haunted Bookshelf blog.  I wanted to have all of my shifter romance reviews in one place, so this was brought over to Shifter Haven.  Both reviews were written and created by me.)