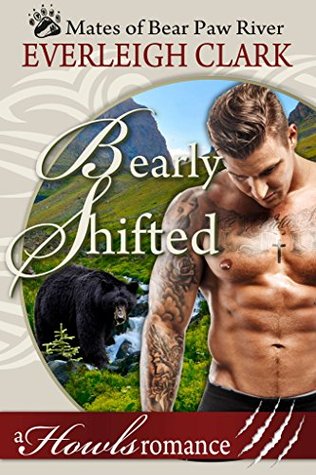 Nissa Alexander returns to Bear Paw River ten pounds and one boyfriend lighter with an attitude screaming ‘Leave me the hell alone’. The last thing she needs is her older brother, the Alpha, lecturing her about settling down and true mates. Hell, he doesn’t even have his own mate, so he has no right to talk.

And then, there’s the hunky bad boy, who’s working a missing person’s case in her neck of the woods. He needs to stop sniffing around before someone gets hurt. Nissa’s heart has been trampled on enough these past few years. She is absolutely not going to fall for this lone wolf. Not gonna happen. But her bear isn’t taking no for an answer.

Zach Werner is on the hunt. But this time, it’s not for a predator or a bad guy to bring to justice. His job is to find a missing woman. Why the Florida wolf pack is paying so much money to find this female, Zach doesn’t know. And he doesn’t care. His job is his life. At least, until he meets Nissa. After a brief tangle in the woods, Zach knows this curvy beauty is his mate.

Can he convince her he’s the wolf for her and stay alive long enough to finish the job?

Titles in the Mates of Bear Paw River series include:  Bearly Shifted –

Nissa has been denying her shifter heritage for a while now.  She’s denied her bear her ability to shift, kept her voice quiet for so long now that when she wants to find her bear she is bearly felt.  This is what she wanted, to live in the human world far away from Shifters.  For Nissa knows first hand what can happen when one’s animal gets out of control.  Yet, the human world held nothing but heartache and more betrayals for Nissa.  She’s returned home and at the insistence of her brother, her alpha, she is trying to win back her bear.  Only now her bear is turning her back on Nissa.  She needs to find peace with her bear once more but has no idea how to go about it now.

Zach is a wolf shifter well known for his tracking abilities.  He’s made a living of tracking people down, and right now he is in the middle of the hunt for a woman who someone wants to find very badly.  There’s something else going on there, but unless it interferes with his task he’ll let it go.  What he cannot let go is the knowledge of a beautiful woman in the woods obviously having troubles with her shifting abilities.  It’s not helping the situations one little bit to discover that this lovely bear shifter is his mate.  Finding her couldn’t have come at a worse time.

Bearly Shifted sets the stage for the Mates of Bear Paw River series.  There is a thread, hints running through this first story that give us some idea of what the ongoing danger will be within this series.  It looks intriguing.  For now, we have Zach and Nissa.  Neither one looking for their mate, one terrified of of giving her shifter side freedom, the other worried about what finding his one mate will do to his own future plans.  Steamy, snarky, and definitely an interesting couple, Nissa and Zach lay the groundwork and give us a compelling story to follow.  I enjoyed this couple – their coming together was certainly full of issues, but at the base they need each other.  Actually hoping to watch their relationship deepen throughout the series as secondary characters.

I would recommend Bearly Shifted to any Paranormal Romance or Shifter Romance reader.  Interesting plot, unique characters and the threat of danger to come… just my kind of Shifter Romance.