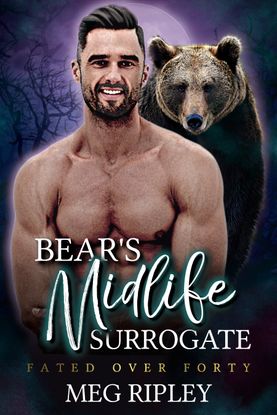 At 41, I never imagined I’d be signing a baby contract.  Or that the father would be my one true mate.

My ex gambled away my kids’ college funds along with my dreams of starting a business.  After putting everyone else first for the last 23 years, nothing will stop me from making my dream a reality.  So when a bear posts he’s looking for a surrogate, as crazy as it sounds after having three grown kids, I know this could be the ticket to getting my food truck off the ground.

I loved being pregnant and I know what to expect, but when I meet Evan at a coffee shop, my bear’s buzzing, and it has nothing to do with my latte.

The man I’m sitting across from is my mate.  And he wants us to start a family. Together.

Raising another cub was never part of my business plan. Until we end up making it the old-fashioned way.

Bear’s Midlife Surrogate is the seventh title in the Shifter Nation: Fated Over Forty series and brings two mates together… finally.  But perhaps just a touch too late when Evan decides that he’s done waiting for his fated mate to appear and decided to bring his dream of having a cub to raise, love, and secure his heritage to reality by hiring a surrogate.  A woman who turns out to be his mate… his uninterested in a lifetime together mate.

Amy has finally dumped her jerk of an ex-husband after years of being with a man who was not her true mate, and a man who puts his gambling addiction above everything else.  The jerk has stolen money from his kids, and his ex-wife leaving her in debt while he moves on without a care.  Amy’s dream of opening a food truck (cart) business went out the window when, because of her ex, she was unable to get a loan.  When she saw the notice for a surrogate she jumped at the chance.  She has three adult children, loved being pregnant (for the most part) and the fee offered would definitely get her business off the ground and out of her dreams.  But fate has one more twist for Amy… the bear who wants his own cub is also her mate.  And she’s never setting aside her dreams again for anyone so she says “No, not interested” to Evan and his bear.  She’d carry his baby but they had no future as mates.

I adored Evan.  He’s a man who knows what he wants, a child of his own even if he will need to raise that cub alone (aside from family and clan).  Discovering that Amy was his mate was both the happiest day of his life and the most heartbreaking as well.  His mate might not want a life with him and their cub, but he would do everything in his power to make certain that she’s watched over and tenderly cared for during the pregnancy.

I also loved Amy, and I certainly understood her reasons for turning Evan down.  She’s always given, set aside her dreams for others or because of the actions of others.  She deserves to see her dreams come true.  Watching Amy softly fight Evan on just about everything in order to maintain her independence was emotional.  They’re mates, one of them shouldn’t be fighting so hard to remain apart but I understood why.

The villain here is particularly vile.  And as danger is added into their lives this couple will have no choice but to begin working together, even if reluctantly on Amy’s part.  Bear’s Midlife Surrogate is a combination of tears and laughter, finding love and facing reality, fighting off danger, and learning to lean on others for help.  The chemistry between Amy and Evan is sizzling, the secondary characters fit so naturally within the story, and some have or will have their stories told one day soon.  I loved watching this couple work their way to their happy future, but it certainly is a road filled with potholes to maneuver.   Would I recommend this story?  Oh, definitely – I already want more… and I have a couple of books in this series on my TBR pile that are being moved to the top because I don’t really want to leave this world yet.

Available for the Kindle (eventually since this is an ARC review) 🙂