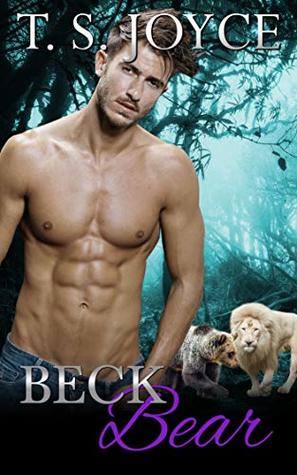 Just when I thought I could not possibly fall deeper in love with the Shifters of Damon’s Mountains Universe or with T. S. Joyce’s imagination and story telling skills along comes Beck Bear, Juno and Rhett’s romance and I’m completely blown away, totally captured once again.  Emotionally, I don’t know how she can possibly top this one… yet, I’ve not one single doubt that she will because that;s the type of story teller she is.

This time there is no light recap of the basic story.  There are far too many places where I could let my enjoyment of Juno and Rhett’s amazing story allow a slip that could ruin this for someone else… and I try very hard not to do that.  This time it’s all about emotions, and it’s not always easy to capture those elusive things in words, but I’ll do my best.

Bravery comes in many shapes and situations.  You are about to meet examples of bravery at its finest.  Juno is driven.  That feeling is strong, we know she’s out to accomplish her personal plan and nothing, not even a deep friendship will stop her… or at least in her mind it won’t, in reality friendship tops just about everything else and Remi proves that quite well.  Rhett is also driven but for a far different reason.  He hides in a last chance Crew, deep in the mountains and takes pot shots at his friends (for all their grumbling about each other, they are friends), turns on the constant joker persona and hides his true self.  Two worlds, two lives will collide when Juno and Rhett meet.  The word “mate” isn’t used, and I found that omission conveyed an even stronger, deeper connection between them.  Because everyone, Rhett, Juno, the crew, Remi and the reader knew what they were to each other… but that label wasn’t given to what they share until almost the ending… still we knew, it’s obvious even if unspoken.  And to be clear without giving anything away… I understood why that title wasn’t used, it’s telling, it’s emotional and it fits for their story so perfectly.  You’ll see.

There is no way that I can explain to you the emotional impact that Beck Bear had on me.  Yet, it’s very real.  Because of the connection within the Damon’s Mountains Universe set of series, there was a strong feeling of going home, of getting that first glimpse of a dear friend after a long time apart, that coming home feeling that probably only people who love deep, connecting series will “get”.  If you’ve read the connecting series you will find some familiar faces that will bring back some amazing memories of other romances, other times when we got lost in Damon’s Mountains with them.  I sincerely hope there is more one day because that would be an amazing story… and to say more qualifies as a spoiler.  I just hope there is more, enough said – those who’ve read Beck Bear understand.

As you can tell, I was completely blown away, completely captured by the emotions of Rhett and Juno’s romance.  It’s such an intense story in many ways, in others it’s a sexy love story that will make you smile and believe in happy ever afters.  Now, I need Grim’s story.  Grim is such a complex character that I cannot wait to understand his full story and meet the person brave enough to love him.