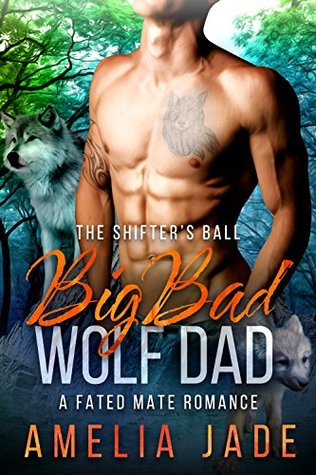 Harden Archer had lost everything. His family, his friends, his homeland. Even his wolf. Now, living on the goodwill of the shifter territory of Cadia, he must find a way to recover from the torture he’s suffered in the past, become a productive member of society, and even find a mate. So when he receives a fancy invitation to the Shifter Ball, he decides that he’s going to go, even if it’s unlikely he’ll find a mate. But the moment his eyes land on the woman in the shimmering purple dress, he knows he was very, very wrong.

Erika Rey was wasting her time. She wasn’t even sure she wanted a shifter for a mate. She was already carrying the child of one within her, thanks to a villainous—but now destroyed—human corporation. Did she really want to bring another into her life? Saying no to the invitation wasn’t really an option though. The shifters of Cadia had given her food, clothing, and shelter. The least she could do is go to the Shifter Ball. But she wouldn’t dance with anyone. Certainly not the unbelievably gorgeous Harden, whose lean, hard muscle and pale green eyes speak of so much pain. Absolutely not. No way.

One dance later, the pair have hit it off, bringing smiles to both of their faces. The real challenge has just begun though. By associating herself with Harden, Erika finds out that she’s put a lot in jeopardy, including her unborn child. Not everyone likes the outsider, and several of them have made it their mission to run him out of town. Or else. But Harden is done backing down. It’s time to show them all who the big bad wolf in town really is.

The aftermath of the destruction of The Institute and it’s nefarious plans has left a lot of innocent people in a kind of limbo, rebuilding their lives and in many ways dependent upon the good will and funding of Cadia.  While the majority of the citizens of Cloud Lake and Cadia itself are quite willing and ready to help these victims – others hold on to their bigotry, bullying, prejudicial attitudes and wreck havoc for anyone they target.  With those attitudes in mind we come to Big Bad Wolf Dad.

Harden is one of those victims.  Once a fighter in the Kronum Resistance, Harden had been captured and tortured by members of The Institute.  He had been rescued, along with the women who were also duped by The Institute by the Koche Brothers.  It has taken a while to heal from the physical injuries, but what is worse is that he no longer has a connection to his wolf.  Yet one more vital part of him that this vile human organization stole from him.  Now, he’s starting over and accepting the invitation to the shifter’s ball is one step in that direction.  He isn’t holding out much hope that he’d find his mate among these women … but it couldn’t hurt, much, to at least try.

Erika is  living on the charity and kindness of strangers.  Duped by The Institute to carry a shifter baby for their own evil purposes, now she’s free, feeling both defensive and encouraged about the way the citizens of Cloud Lake and Cadia have helped these 300 women, pregnant women.  An invitation to the shifter’s ball seems over the top, she knows what the intention is – to find them mates among the shifters who will attend as well.  Her pride, and in some ways, her lingering fears make her hesitate but what’s one night of having fun going to do… change her life?

Harden and Erika’s romance is touching, full of emotions and learning how to stand up for yourself once again.  They are an amazing couple.  Yes, Erika is hesitant, and at times she was frustrating in her decisions.  But her reasoning was solid so it’s hard to blame her for the choices she was forced to make.  Harden’s loss of everything, including his wolf is heartbreaking.  He strongly suspects that Erika is his mate but without his wolf how can he be certain.  Yet he’s willing to take the risk, and the pain of pursuing the relationship and facing the consequences.

We’ll run into some familiar faces, it’s always a treat for me when that happens.  There are hints in this story, names mentioned that have me hoping for more stories of the men who where harmed by The Institute and the women who need to find their own happy ending after the abuse of The Institute.  We already get a good idea of who the next couple will be – and their story is going to be very interesting.

I loved this return to Cadia and Cloud Lake and would highly recommend this story and these series to any Paranormal Romance or Shifter Romance reader.  Although if this is your first story concerning Cadia I would strongly suggest putting it aside and going back to the beginning or at least to The Koche Brothers (Blackjack Bears) series for some background… and some amazing stories.