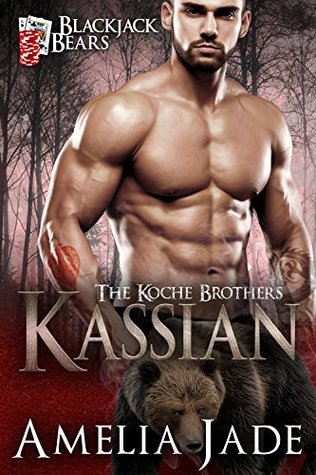 Kassian Koche hasn’t had it easy of late. His eldest brother and mentor has been kidnapped. All of his younger brothers are finding love amidst the ongoing struggle against the evil Institute. Things are looking bleak. But out of the darkness comes a curly-haired beauty with curly hair and hips to unhinge his jaw that might just prove to be his salvation. If only he knew how to show her the real him. The side that he’s buried away…

Rosie Hernandez wants to help the fight. After the brothers rescued her from the clutches of the Institute and sent her back to the city, she decided to throw in her lot with them. Even if they didn’t want her help. After all, she has no special skills, no hidden talents or powerful connections. What good could she possibly be to a group of shifters and women who were trained marksman, hackers, and spies?

But after a visit from the Institute puts the smoldering yet volatile Kassian in an impossible situation, the group may just find that her best skill is that of animal tamer. Rosie will need to help guide Kassian through the tangles of their own relationship, while also ensuring he isn’t torn apart by the impossible mission assigned to him. Love is a strong and powerful bond, but will her’s be enough to help him save his family?

With every additional brother’s story being revealed in this series I always think the tensions and pure storytelling of the previous one cannot possibly be met or surpassed – and every single story I’ve been proven  mistaken.  This series simply keeps getting better, more intriguing and so much more understanding of what makes these men what they have turned out to be.

Kassian is a man who barely has his bear under control.  Seen as a troublemaker, an out of control danger at other times – this is a man on the edge and it will take an amazing woman to bring him the understanding and the affection he so badly needs.

It’s a bit difficult to explain Rosie’s connection with this group without going into much detail for she first appeared in the previous story, Blackjack Bears: Gavin, and if you haven’t yet read that one I don’t want to give away spoilers.  Let’s simply say that Rosie played an important in fighting the Institute and now she wants to help even more by being a part of this group.  She unfortunately has no real skills that could help in the fight or so she’s told – yet Rosie has street smarts, she’s a fast thinker on her feet, and she brings ideas and thoughts on what is happening that only an “outsider” could.  She is also Kassian’s mate, and anything or anyone that could calm down this wild man in any fashion is a welcome member of their newly formed alliance.

Blackjack Bears: Kassian is a powerful story, rich with tensions, drama and struggles as this brave group takes on the Institute and it’s nefarious plans.  The magnitude of the Institute’s plans, another epic battle and seeing one strong woman “tame” one powerful, out of control man make this a story that you will get caught up in from the first page to the last.  I’d recommend this story on it’s own merit – but would definitely recommend it as part of this set of ongoing series.  Any Shifter Romance or Paranormal Romance reader would enjoy this story and all of these characters.