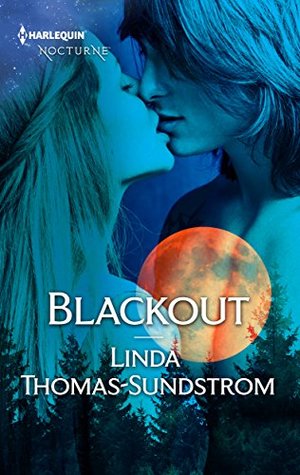 It’s called the Blackout—the initial trauma when the beast within awakens for the first time.

Dylan Landau experienced it six months ago when he transformed into a werewolf. Since then, he has wandered the streets of Miami alone, trying to hide his wolf form…until the night he sees cop Dana Delmonico undergo her own painful change.

Now Dylan can’t stop thinking about Dana—and she can’t fight her attraction to Dylan. Because when both their inner beasts are aroused, there can be no stopping them…

I’m a reader who needs, or is often compelled to go back to the beginning of any series.  When I don’t or I accidentally read something in the middle I know that I’m missing subtle nuances, tidbits of information that will enhance my reading enjoyment by knowing the “whole story”.  So when the current release of the Wolf Moons series caught my eye I made the decision to go back, to understand this world better – and as always, I’m very glad that I did.

Blackout has such an otherworldly feel to it that I was immediately drawn into a world filled with dark corners, patches of moonlight and danger all around.  While Dylan had some idea of what to expect from his family’s “curse” that didn’t make his first blackout any easier for he’d thought that it had skipped over him.  No such luck.  So while fighting this month’s transformation he notices a police cruiser being driven erratically, and a police officer in obvious distress… from her first blackout experience.  His instinct is to stay away for he’s trying to avoid the moonlight and detection by others, but watching her helplessly react to the moon’s caress is something he simply cannot turn away from.  When he steps in to help this woman his life – and hers – will be forever changed.

While Blackout is a short introduction to the Wolf Moon series it is also an extremely emotional story.  We will experience Dylan’s frustration at his curse, the pain of the shift, the discomfort of the feel of moonbeams on his skin.  We feel Dana’s confusion, fear and disbelief at what is happening to her as well as her anger and attraction to the man – wolf – who is trying to help her.  They make a connection or their beasts do and nothing will ever be the same for them again.  All of these emotions flow off of the page until it feels as though I’m right there with Dylan and Dana… and that feeling in a book means I’m going to follow every single story in this series and perhaps beyond.  This is why I read Shifter or Paranormal Romance for that intense connection to a story and its characters.

This title was originally published in 2009 and is also a bonus story in Red Wolf – so it is possible that you’ve read this before.  If not, then please don’t let the publication year keep you from a thrilling, intense start to a series.  Time passes, but great stories are forever.  I would highly recommend Blackout and I’m heading over to Amazon to pick up the next story.  I’m hooked already.