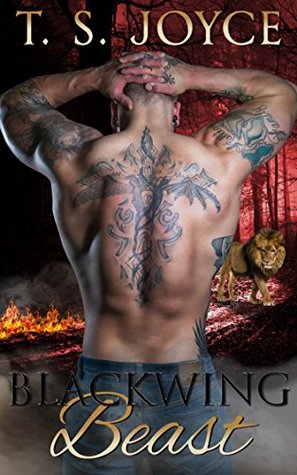 It’s going to be really difficult to give up this series, or these people whose lives I’ve followed since the very beginning.  Bittersweet is always my feeling at the closing of any series I’ve enjoyed, this one is a little bit more of that since I’ve traveled this road with them all for so long.

Blackwing Beast is slightly longer than the previous stories in Kane’s Mountains – there’s a bit more story to tell for Beast.

Kiera is searching for Kane.  She knew him back when they both were in Apex, that horrible group of mad scientists who believed they had a way to rip the animal from Shifters.  Thankfully, Apex is now shut down but not before hundreds of Shifters were killed in the process of “cleansing” them of their animal.  Not before the damage was done to Kiera.  She had heard a rumor that it was possible for shifters to get their animals back through a claiming bite – unfortunately, that isn’t the only ingredient needed but she didn’t know that detail when one nasty piece of work agreed to give her the bite in exchange for sex.  Actually, the jerk lion shifter had plans for Kiera.

Now she’s here in Kane’s Mountains.  She’s been stalking him and that ragtag crew of misfits of his.  What a bunch of losers were her thoughts when knowing the D Team only from what was public record and viewed from a distance.  She had a decision to make and soon.  Were Kane and his mate, Rowen the right choice for her needs with these dangerous Shifters surrounding them.

Beast has been driven to utter madness from the deaths of his pride.  Rumors swirl around him like a whirlwind, but nothing comes close to what the reality is… and he has never denied or acknowledged those rumors.  Beast is close to the edge of his control.  He has one last thing to accomplish, then he can ask Kane to put him down.  Until the lioness showed up, stalking his crew and showing signs of sickness.  He might be unstable, but he knew how to protect those he considered his – the D  Team, Kane and Rowen.

Yet, if this truly is the end of this series – it could not have ended any better than it did with Beast and Kiera’s story.  Two people who had suffered so much, had so much stolen from them until the point where they were broken almost beyond repair.  In each other they found a reason to live.  Blackwing Beast brought me to tears of sadness and of joy.  If this is indeed the end – I can be content to leave my friends safe and secure in their new home.

What an amazing ride this has been.  To say that I highly recommend these connecting series is simply not enough.  If you allow them, they will touch a part of your reading heart and never let go.