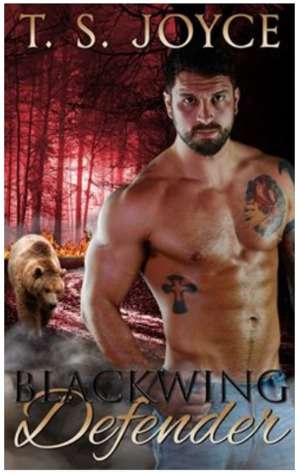 Panther shifter, Winter Donovan, has her life all planned out: claiming marks, marriage, cubs, and pledging to the Red Havoc Crew. But when the man she cares for chooses another, her life gets caught in a tailspin. A new crew announcement could mean a change in her stars, but there is a catch. It’s the Blackwing Crew, and is run by fire-breathing dragon shifters. Not only that, but when she finds her bravery to travel to the Smoky Mountains and apply, the crew has somehow attracted the most damaged and terrifying shifters in the world. And one of those has his sexy eyes on her.

Logan is decisively deadly when it comes to protecting the fledgling Blackwing Crew, but the grizzly in his middle is a monster. He’s here for one reason, and one reason alone – to go out fighting. But the quiet beauty, Winter, has him wishing he could be saved. When the alpha of the new crew, Dark Kane, finds out what Logan really is, the choice of life and death may not be up to him anymore. And now he and Winter will have to go to war if they want a chance at forever.

We’re about to begin new adventures with a brand newly created crew in Kane’s Mountains.  If you haven’t read the over arching series of Damon’s Mountains or Harper’s Mountains – don’t worry, this is a new crew, each with their own unique story.  However, (you knew there had to be a but, right?) … I would strongly recommend reading at least the final story in Harper’s Mountains which is Blackwing Dragon – there you will read Kane and Rowan’s story which will give you a bit of understanding of what Kane is and why he’s reluctant to take on a crew in this new series.  So, that’s my opinion if you’re starting this new series blind – but it’s my own opinion, you’ll do as you wish.  *grin*

My heart ached for Logan at the beginning of this story – and to be honest, in many ways throughout it as well.  As a teenager, Logan had the misfortune of having an Alpha who used him for his own nefarious reasons.  By the time we meet up with Logan he is a hardened man with a bear who is on the edge of uncontrollable.  Logan has a purpose for applying to the Blackwing Crew, and it’s not a pleasant one at all.

Winter has had a life that not many women could have survived with their sanity intact.  Recently she’s had her heart and spirit broken by the man who was supposed to be her mate.  In desperation her Alpha pretty much shoved her out of the nest of his crew and recommended that she apply for the newly created Blackwing Crew.  He knows Kane, and believes that she can restart her life if she takes this chance.  At the beginning of their story, Winter is so beaten down by life that she follows her former Alpha’s last order, even if she fears that she will once again be rejected.

Social media expert, general overachiever and pain the many behinds – Air Ryder (from Harper’s Mountains) has sent out the call to anyone listening that there is a new crew about to form… and to show up on Kane’s doorstep.  Yeah.  Right.  Not the best idea ever – but the charming and at times devious Air Ryder has his reasons and they just might work out… eventually.  In Kane’s Mountains we are meeting the members of a new crew who hold no loyalty to each other or Kane.  Men and women, human and shifter who have their own unique reasons for wanting a fresh start.  We get to see their attitudes, their fears and their assets begin to slowly form a group and eventually a crew.  It’s an interesting shift from the usual fully formed pack, we’re getting to see the birth of a pack – and that throws all kinds of interesting situations at them… and us.  Meet Logan, Winter, Beast, Dustin and Emma, people with very interesting stories to tell.

The sparks begin to flicker between Winter and Logan almost immediately – and their story is often bittersweet.  I really like this couple, they are definitely misfits who fill out the missing parts of the other.  Their romance isn’t going to be easy, they will face off against each other and the outside world before the ending.  But there is that – something – that keeps them trying, and the way that was handled makes them a very favorite couple indeed.

I’m looking forward to the rest of Kane’s Mountains, having gotten a taste of the characters who inhabit this crew I’m eager to learn their stories.  If you love Shifter Romance, interesting characters and a plot that twists and turns then you’d enjoy Blackwing Defender.  I would definitely recommend this one.