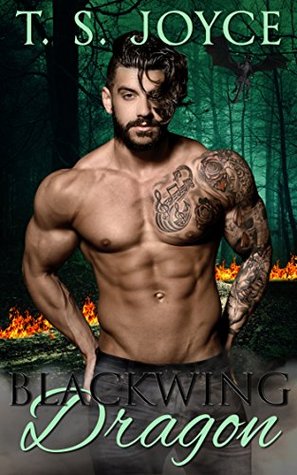 Kane Reeves is being hunted. He has done well to keep hidden all these years, but Damon Daye has finally come to collect on the blood debt of Kane’s father. Damon has sent a great Bloodrunner Dragon after him, and Kane can see his death coming. But his huntress is beguiling and sweet, and Kane is drawn to her in ways he can’t explain. And as he gets to know the sassy beauty, she feels less like the death of him, and more like his destiny. Too bad she’s a Bloodrunner, the mortal enemy of his ancient clan, and on a collision course to end his life.

Rowan Barnett has been charged with the protection of the Bloodrunner Crew while the alpha is unable to shift. The problem? The crew has chosen the wrong dragon for the job. She has no trust for her unstable inner monster, and now she’s lost her treasure. But when a mysterious and unlikely hero decides to help her out, she begins to think everything happens for a reason. Dark Kane’s eyes are terrifying, he feels like a beast, and he looks at her like he could just as easily kill her as kiss her, but there is something about him that Rowan can’t resist. Something that’s calling to her dragon and putting them both on a path of mass destruction.

And now Rowan will have to figure out how to protect the world from the last Blackwing Dragon, while protecting the man she loves from himself.

Every time I finish one of T. S. Joyce’s stories I declare that one is my new favorite – it happens every single time, so I figure I’m on a pattern with her stories because Blackwing Dragon is no different.  This one will rip your heart out and then give it back to you whole again and so much stronger than before.

Rowan is a Bloodrunner Dragon, from one of the most powerful families around… well, what there is left of them.  But right now she’s not feeling so strong, she’s downright nervous and scared.  She’s leaving her home in Damon’s Mountains and her crew, the Grey Backs to head out for Harper’s Mountains temporarily.  Harper is pregnant and cannot shift, the Bloodrunner crew needs a strong dragon protecting them while their Alpha is unable to shift in order to protect her unborn baby.  Damon has sent her with the strong belief that she can handle anything or anyone.  Rowan wishes she believed the same.

Kane is dark, powerful and gives off dangerous vibes just by glancing at him.  When the panicked Rowan keeps popping up in his life, at the airport, seatmates on the plane and then a desperately afraid dragon who cannot get to her treasure since the airline misdirected her luggage.  To say that Kane was not thrilled would be an understatement.  He is the embodiment of the strong, silent type – Rowan is a bubbly, nervous chatter bug who has no filter nor cares if you don’t want to talk.. she will make up for your lack just fine.

On the surface, no two people could be further apart.  Yet, there is something there between them – a connection that Kane hasn’t felt in years and one that Rowan is definitely wanting to follow up on – if he’d just stop being so grumble-ly and grumpy.

And that is as far s I’m willing to go for an introduction to this amazing couple.  Both have secrets.  Each has had horrible, unspeakable things happen to them  Rowan knows that Kane is her mate before he acknowledges it, but he acts on it first.  They are a contradiction in motion, and at times their determination to do what’s right for the other gets them in trouble and heartache.

Throughout their story we will see Rowan grow, especially in confidence, and see Kane begin to accept that he sin’t as dark as he believes.  These two need each other to complete themselves.  But before that can happen there’s going to be sadness, danger, heartbreaks and one epic battle.

It’s never easy to see a series come to a conclusion.  When it’s good you just want it to continue forever.  Blackwing Dragon brought Harper’s Mountains to a close in the most amazing, satisfying way.

And the excellent news is that mid-September 2016 we will have Kane’s Mountains starting – a new series, with some old friends and new ones to come to love.

Blackwing Dragon is a story that you need to read for yourself.  No one can do justice to a story the way your own imagination can.  Pick this one up and get lost in an amazing journey for Rowan, Kane and the entire Bloodrunner Crew.  It’s simply amazing… and I would highly recommend this entire series.